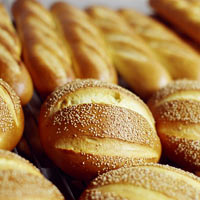 David Bastar hopped into the Grimaldi's Home of Bread truck on Manhattan's Upper East Side early Monday while the real driver was making a delivery at a pizzeria, according to police.

Reportedly clothed in just his briefs, Bastar then allegedly began dropping off baguettes, whole-wheat rolls and sourdough bread - but not to the bakery's customers, said Joe Grimaldi, the owner of the business in the Ridgewood neighborhood of Queens.

"The bread was left somewhere. Where I don't know," he said. "He dropped a lot of bread."

Worth a lot of dough.

Grimaldi said about $5,000 in bread was taken. The bakery later was able to accommodate all its customers.

"It's a bizarre incident but nothing happened to the truck. No one was hurt. There was no damage. I got my truck back," said Grimaldi.

"He stole the truck and he made all the deliveries? That's awesome," another customer reportedly said.

"I think it's kinda weird that he would just go and deliver stuff in his underwear," Grimaldi's cashier Isabella countered.

Bastar, of Nanuet, was arrested later at LaGuardia Airport, where police say he wound up after tailgating a driver for several miles.

The driver became concerned about being followed and called police, said Erica Dumas, a spokeswoman for the Port Authority of New York and New Jersey, which operates the airport.

Police then determined the truck had been stolen that morning.

Bastar, who was taken to a hospital for evaluation, was charged with criminal possession of stolen goods and driving without a license.

Grimaldi said a shuttle bus driver who witnessed the arrest called the bakery and said, "If you need a driver, I'll work for you."