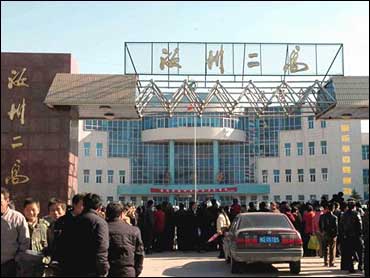 Police have detained a man accused of slashing as many as nine boys to death as they slept in their high school dormitory in central China, state media reported Saturday.

Yan Yanming, 21, was reported to police by his mother after he tried unsuccessfully to commit suicide following the attack late Thursday in the city of Ruzhou, the Xinhua News Agency said. It said he confessed and said he acted out of hatred for the students, but didn't give details.

Xinhua put the death toll in the attack at eight, but another state-run news agency, the China News Service, said nine students were killed.

Yan broke into the dormitory at just before midnight on Thursday and "chopped eight people to death," Xinhua said. The China News Service cited a survivor as saying that during the attack, the man with the knife said, "Don't blame me."

It was the fourth knife attack reported at a Chinese school or day care center in as many months. The earlier assaults left one child dead and 42 people injured.

The spate of violence prompted the government of President Hu Jintao to issue a nationwide order in September for schools to hire guards and tighten security.

The reason for the surge in knife attacks isn't clear. They have taken place in areas throughout China and involve attackers from different backgrounds. In the only other fatal case until this week, an attacker at a Beijing kindergarten was reported to be an employee of the school who had a history of mental illness.

But China's cities and towns seethe with grudges and personal feuds amid wrenching economic and social change.

Fatal bombings, mass poisonings and other attacks are reported frequently, usually blamed on people trying to hurt business rivals or seeking revenge in often minor disputes. Firearms are rarely used because private gun ownership is illegal in most parts of China.

Last month, six men were arrested in Beijing in a knife attack at an Internet cafe that left 14 people bloodied. News reports said the attackers wanted revenge on several men they had met at the cafe, and when they couldn't be found, slashed customers at random.

Ruzhou, a city of 920,000 people, is located about 450 miles southwest of Beijing in Henan province, southwest of the giant industrial city of Zhengzhou. The city government Web site says coal mining is a major local industry.

Photos released by Xinhua showed investigators standing in the dormitory in an area cordoned off with white-and-yellow police tape, while crowds of spectators stood outside the school gate. An unidentified student was shown talking to a relative through the closed metal gate.

On Wednesday, a court executed a man who slashed 25 children with a kitchen knife in September at a grade school in eastern China. Though no one was killed, a court ruled that the penalty was justified because the violence was "especially cruel."

Police said that attacker had a grudge against the parent of a student at the school.

In August, a man with a history of schizophrenia killed a student and slashed 14 children and three teachers at a Beijing kindergarten near the compound where China's leaders live and work.

In September, a man armed with a knife, gasoline and homemade explosives broke into a day-care center in the eastern city of Suzhou and slashed 28 children before police stopped him. Police haven't disclosed a possible motive.