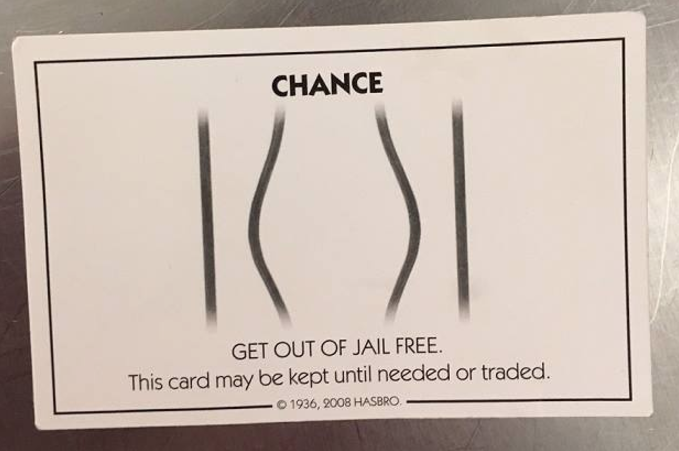 The "Get out of jail free" card is one of the most coveted in the game of Monopoly, but unfortunately for one Minnesota man, it didn't do the trick in real life. The deputy he handed it to ignored the card's instructions, and the man went straight to jail.

It was one of the most bizarre arrests Deputy Mike Vai of the Dakota County Sheriff's Office has experienced in his nearly 4 years on the job.

"It was probably one of the things I will remember most throughout my whole career," Vai told CBS News. "I had a good laugh about the whole thing. I feel like it's something I would try to do."

Vai pulled over a car registered to a woman with an outstanding warrant. He didn't find the suspect, but he run the license of a passenger in the back seat who wasn't wearing a seatbelt. When he discovered the man had an outstanding fifth-degree controlled substance warrant, he asked him to step outside.

That's when the smirking suspect asked the deputy to check his front pocket.

"I thought maybe he's giving me a heads up about a controlled substance right now or maybe it's a dirty Kleenex and joke's on me — now I have a cold," Vai said. His mind was going "a million miles a minute."

He never expected to pull out a Monopoly Chance card.

"Is this what I think it is?" a shocked Vai recalled asking the man.

"Yeah," the suspect said. "I've been carrying it on me ever since I found out there was a warrant — just in case."

But real life isn't quite like a board game.

But the man did not pass "Go" or collect $200 — he landed in the back of a patrol car and on his way to the precinct. He waited to be transferred to Ramsay County, where the warrant was issued.

Before he left, Vai asked the man if he could take a picture of the card. It ended up on the department's Facebook page.

Hundreds of people saw the post and dozens commented, applauding the suspect for his effort.

Though he wanted to keep the card as a souvenir, Vai ended up giving it back.

"I said, 'Who knows? God forbid you might find a cooler cop,'" Vai joked.

Vai said the man is currently awaiting a court date and owed a couple thousand dollars in bail. It's unclear if he's out of jail.