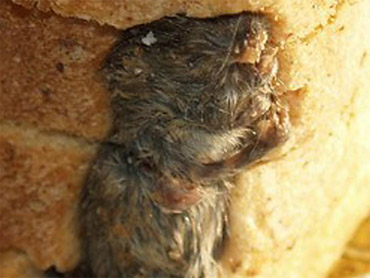 It was hard to explain, that dead mouse baked into a loaf of bread.

British officials have released the photo which proved that Stephen Forse wasn't kidding when he claimed to find the wee creature while making sandwiches for his children.

Forse, who bought the bread from a supermarket in 2009, said Monday he first thought a dark spot in the bread - branded Best of Both - was some poorly mixed dough.

Then he noticed it had fur.

The case wound up in court. Premier Foods pleaded guilty to violating health laws, and was fined 16,821 pounds ($26,470) on Friday.

Forse says his gruesome discovery made him feel ill, and he felt sick again when health officers noted that the mouse's tail was missing, perhaps already eaten in a sandwich.