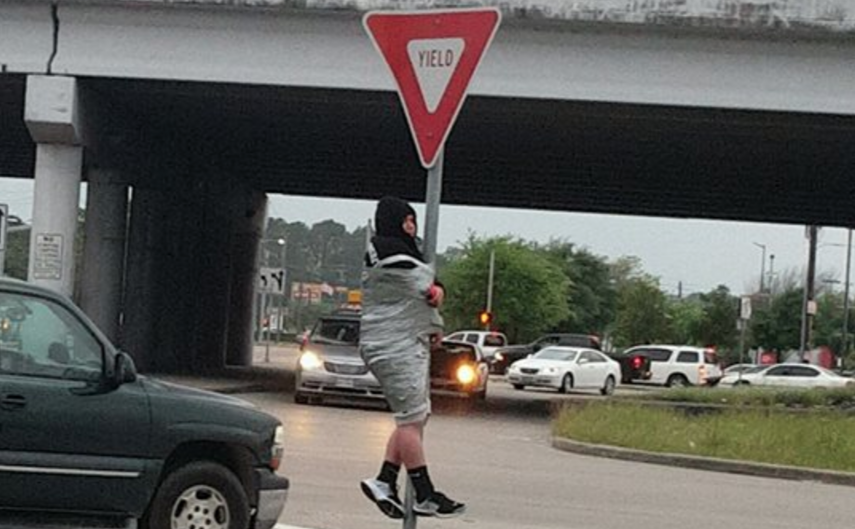 If this yield sign didn’t already cause drivers to slow down, the man duct-taped to the sign certainly did.

Confused Houston drivers did a double-take on Tuesday when they spotted someone dangling about a foot off the ground hugging a yield sign. So confused, in fact, they called the cops.

But as officers from the Houston Police Department arrived at the scene, another man — with a knife in hand — was already on his way to help.

“Drop the knife or I’ll Tase you,” one officer shouted, according to CBS affiliate KHOU.

The man quickly dropped it, explaining to the cop that the duct-taped man, who was identified as 17-year-old Miguel Chavez, was actually his friend. He was just attempting to cut him down.

Chavez said he was taped to the pole after losing a bet on Tuesday’s Rockets vs. Warriors game.

“No one wanted to help me down,” Chavez posted on his Instagram a day later.

(WARNING: This language is graphic and may be offensive)

A video of the prank that was posted on social media went viral with more than 6,100 shares and received hundreds of comments.

While many thought it was a funny prank, others questioned whether it was legal.

But Chavez said he didn’t get in trouble.

The police helped get him down and even gave him a ride home, KHOU reports.