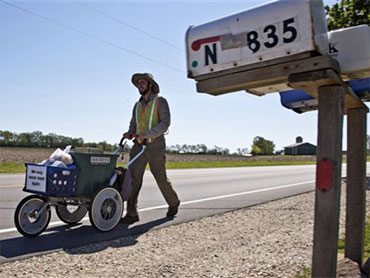 In these uncertain times, most of us cling to the things that make us feel secure. Those who have jobs give thanks. We hug our children a little tighter. We wait - and hope - for better times.

So when someone like Matt Green comes along, we shake our heads a little and wonder. Who is this young man, bearded and weather-worn, pushing a cart down a country road, mile after mile? And why would he abandon a solid career as a civil engineer - a roadway designer, ironically - to walk all the way across America?

"Good question," he concedes to those who frequently ask about his motives.

Unlike others who've made cross-country treks, Green is not looking to break a record of any kind. Nor does he want to draw attention to a particular cause. He has no agenda, other than the handwritten list of directions he regularly compiles from Google Maps, in the event his cell phone can't access them from remote areas.

No, for Green, there's just something about the act of walking that makes him really happy, much more content than he ever would have been in his office cubicle in Manhattan, where he used to daydream about doing something epic like this.

On the road, there's a simple purpose to each day, he says. There is camaraderie with the people he meets along the way. There is excitement in discovering what's around the next bend.

"Playing it safe isn't really that safe," he has concluded. "If you do that, you miss out on a lot of the great things life has to offer."

For him, making this journey is freedom.

Green, a 30-year-old Virginia native, began his walk in late March at Rockaway Beach, a seaside neighborhood just south of New York's Kennedy Airport. The goal: Make it to Rockaway Beach, Ore., just over 3,000 miles to the west.

By air, the trip takes a little more than six hours. Green figures it will take him about six months. He started planning more than a year ago, saving money by living frugally and designing a rolling cart to carry his tent, sleeping bag and the fewest supplies possible.

On days off, he also prepared by leading groups on long walking tours in New York City, where he lived for five years. The routes he chose enabled people to see the city in new ways. He started them off at 6 miles, or 8, and worked them up to even longer distances. The groups steadily grew. People begged him to plan more neighborhood treks. And his own love of walking, and the connections that could be made at a slow, almost meditative pace, deepened.

So when Green told his walking buddies he planned to do a cross-country trip, they were among the few who "thought it was the coolest thing they'd ever heard."

Others, including his parents, weren't as convinced.

They worried about his safety, that he'd get hit by a car or attacked. They also wondered whether their eldest should be more settled in his life.

"For my generation, stability meant something different," says his dad, Barry Green, who lives in Ashland, Va., with Green's mom, Miriam.

In his day, there was more of a premium placed on sticking with a job and moving around less.

Not that he didn't have his own wanderlust, at least for a time. The elder Green remembers how, as a young man - even younger than his son - he saved up money, bought a car and did his own traveling. His own mother would wait by the telephone for him to call.

Now he and Miriam find themselves watching each night for an e-mail that comes when their son pushes the "I'm OK" button on an emergency beacon that transmits his exact location by satellite. Green also carries pepper spray and a stick to fend off attacking dogs. So far, he hasn't needed them.

He understands his parents' trepidation and does what he can to allay their fears, without giving up this adventure.

But for now, he's less concerned about stability, or preparing for something far off like retirement, especially in a time when so many people are having to put off that retirement, anyway.

"What's the point of living the majority of your life preparing for that last little bit?" he asks.

And so, he walks, up to a personal record of 28 miles each day, reloading on food - his main expense - when he passes through small towns.

In the West, he figures there will be five-day stretches with few signs of civilization. But even now, in the Midwest, his directions sometimes take him on hidden roads that most people would miss.

On one secluded stretch near Avalon, Wis., he happened upon a dairy farm with a large garden across the road. A handmade sign above it read: "Welcome Visitors - Gloria's Garden Tours Anytime."

Green knocked on the door. The owner was 84-year-old Gloria Ransom, who was more than happy to show him the garden she'd planted and tended for years.

"My kids would tell me not to talk to strangers, but I don't care. I like to think that everybody is good," she told Green, as she pointed out bright red poppies and other plants and flowers.

"Heaven sakes," she said, "nobody who wants to go through your garden is going to rob you."

She invited him into her grand old farmhouse. She showed him her quilts and paintings and photos of her many grandchildren and great-grandchildren.

She even pulled out an old photo from a trip she made out West with her family in 1937, when she was 11. The mode of transport was a Ford "Model A" that pulled a camping trailer - a rig the adults in the group sometimes had to push up the steeper terrain.

Whether it was that trip or something else, Gloria understood the allure of a trip like Green's. And when he left, she seemed genuinely sad to see him go.

It's the type of connection Green has found repeatedly on this trip - another lesson, says the self-proclaimed introvert, in taking chances and stepping outside his comfort zone.

"The people I've met who've had no fear of me, they generally seem to be really happy people," he says. "I just hope I can return that kindness to others."

Jason Eppink, a 28-year-old assistant museum curator who met Green through the walks he led in New York, says Green's journey is "obviously a personal project, but I don't think it's a one-way street."

Each night before the sun sets, Green counts on that ability, knocking on farmhouse doors to find a place to pitch his small tent.

He doesn't always get a "yes." But night after night, there is always someone who takes an interest in this young stranger and his quest, including Liz and Ron Struzynski, a bank worker and laborer who live outside Milton, Wis.

"I don't suppose you've watched 'Forrest Gump,"' Ron Struzynski said, chuckling as he compared Green - as many people have - to the movie character known for his penchant for running.

Green grinned and nodded, as he went to set up his tent near the couple's newly planted vegetable gardens.

The Struzynskis let him charge his cell phone and fill up his water bottles. He washed up in their barn, and they invited him in for a meal.

"He's more than welcome, heck," Liz Struzynski said. "It takes a lot of courage to do what he's doing."

Back in Virginia, his parents look at the photos Green regularly sends from his cell phone to his website, which is used by family, friends and people he's met along the way to keep up with the trip.

Green is circumspect when considering whether the journey will help him figure out what he wants to do next.

"I didn't want to be too ambitious about what I would figure out on this walk," Green says. "I didn't want to tell myself that when I was done, I knew what I wanted to do with my life. But maybe in the back of my head somewhere, I'm kind of hoping that."

His parents are hoping that, too, though they're also learning about letting go.