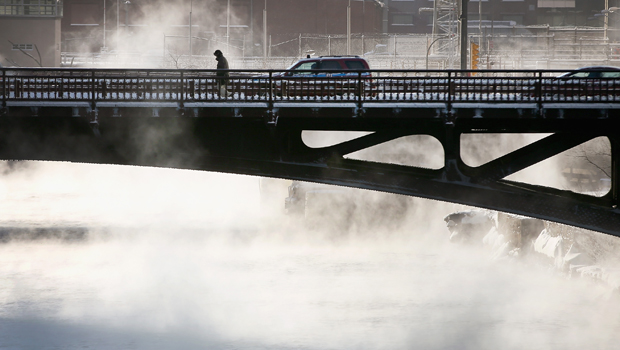 CHICAGO -- A man from Minnesota died after he fell into the Chicago River early Monday, when he dropped his cell phone in the water and lunged after it, reports CBS Chicago.

Another man was hospitalized, and a woman was missing and presumed dead, after they went into the water to try to rescue him.

Police said a 26-year-old man dropped his phone in the river along the Chicago Riverwalk, shortly after midnight. He climbed the railing to try to grab his phone, and fell in the iced-over river.

Two friends who were with him jumped in the river after him.

Witnesses said they called 911 after hearing cries for help.

Luis said he talked to the man who was yelling, and asked if there was anybody else in the water with him.

“He told me he had a friend that he was holding on to, and that there was a girlfriend too that fell in the water, that was under the water, but he couldn’t find her,” he said.

Police and Fire Department divers searched the icy waters for all three people, and pulled the two men out of the water, but suspended their search around 3 a.m., with the woman still missing.

The two men were placed on stretchers and taken to hospitals.

The 26-year-old man who dropped his phone later died. His 23-year-old friend was in critical condition at a local hospital.

Police said the search for the 21-year-old woman’s body would resume sometime after 8 a.m. Monday.