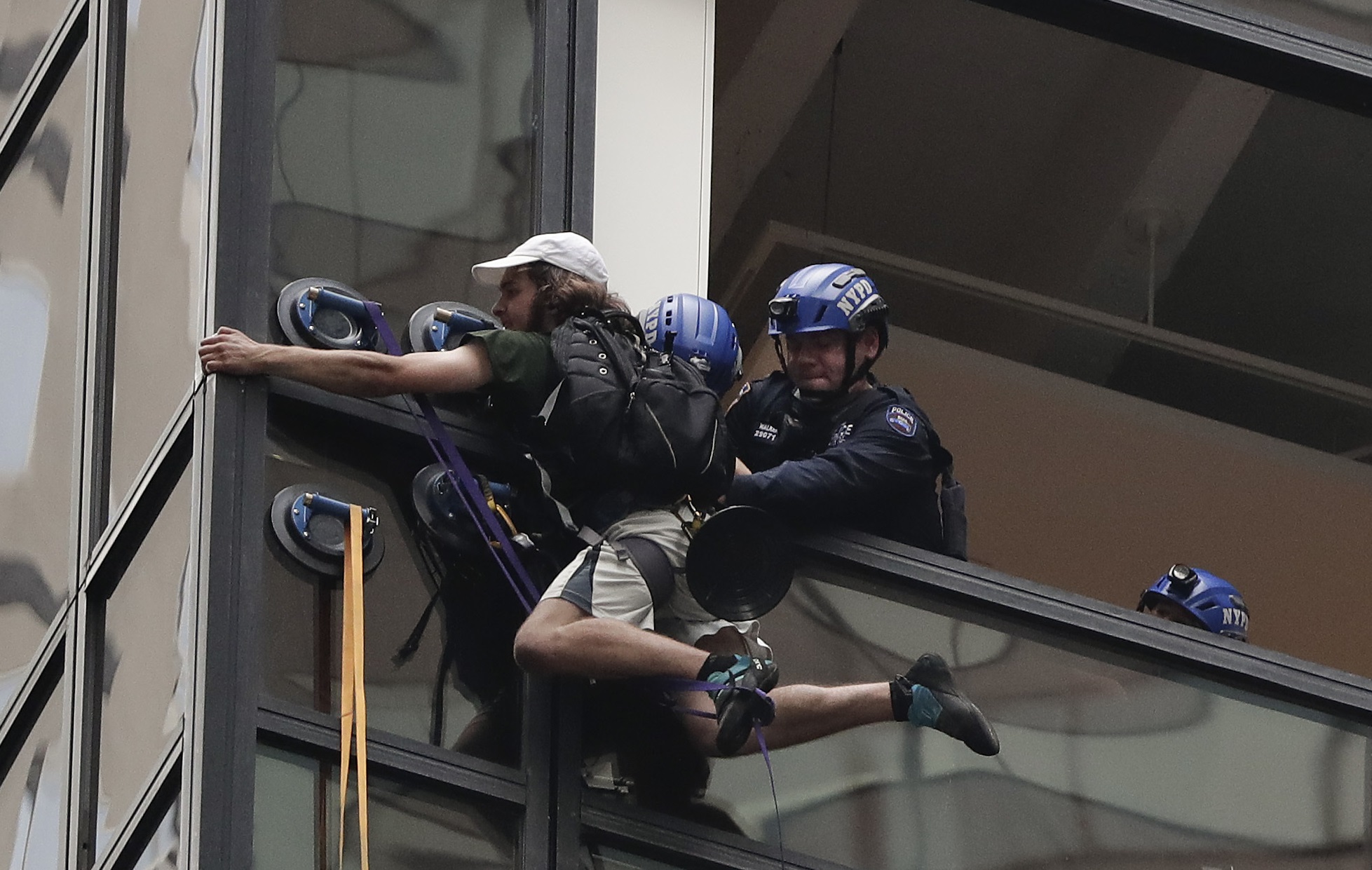 NEW YORK -- A man who wanted an "audience" with Donald Trump spent three hours scaling the glass facade of Trump Tower on Wednesday using large suction cups, climbing as high as the 21st floor before police officers grabbed him and hauled him to safety through an open window.

The climber, identified by police as a 20-year-old Virginia man, wore a backpack and used a harness and rope stirrups to fasten himself to the side of the 58-story Manhattan skyscraper.

He was eventually apprehended around the 20th floor after nearly three hours of climbing.

Special operations officers could be seen grabbing the climber into an opened window on the building's 21st floor.

"I reached out. I took hold of his hand and I said, 'Sir, would you come with me,'" said detective Christopher Williams, who made the grab.

After he was hauled into the window, onlookers gathered on the streets below the Fifth Avenue tower cheered.

Police say he's now in custody and has been taken to a local hospital for a psychiatric evaluation.

During a press conference, police said the suspect posted a video to Facebook before the climb. The video is titled, "Message to Mr. Trump (why I climbed your tower)" and was posted on August 9.

In the video, he discusses wanting to meet Trump, and says he is a "private researcher."

"The reason I climbed your tower, is to get your attention," he said.

At the end of the video, he tells people to vote for the Republican presidential candidate Donald Trump.

The climber played a slow-motion cat-and-mouse game with officers, eluding them by methodically working his way across the facade and angled corners of the building.

He was speaking with officers through the holes cut in the side of the building. When would-be rescuers smashed a window above him, he ducked to avoid big shards of glass that fell.

Police deployed large, inflated crash pads at the scene but made no visible attempt to grab him as he passed their positions until the very end.

The 58-story building is headquarters to the Republican presidential nominee's campaign. He also lives there.

On Wednesday evening, Trump tweeted about the incident thanking the NYPD.

"This man performed a ridiculous and dangerous stunt. There's damage to the building and he caused the unnecessary deployment of New York's finest to protect his safety and the safety of everyone in the building. He's caused the shutdown of traffic on Fifth Avenue," said the statement. "I'm 100 percent certain the NYPD had better things to do. If Mr. Trump were here he'd be thanking law enforcement for the job they're doing and a job well done."

Parts of the building, including the terraces, are open to the public during the day.