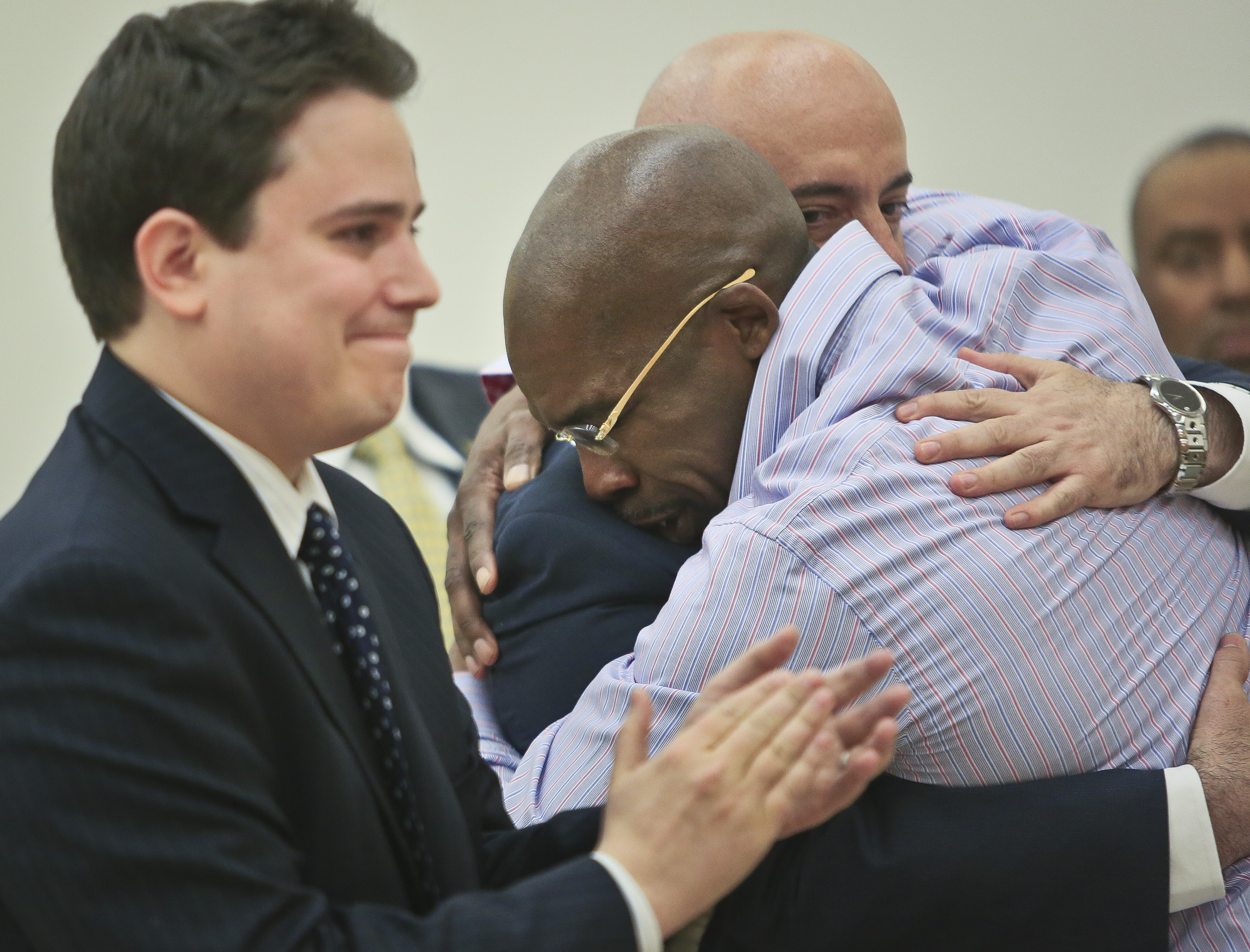 NEW YORK, N.Y. - Jonathan Fleming, a man who spent almost a quarter-century behind bars for murder, was freed in New York City on Tuesday and cleared of a killing that happened when he was 1,100 miles away on a Disney World vacation.

Fleming, 51, was in tears as he hugged his lawyers and family in a Brooklyn courtroom. Relatives said, "Thank you, God!" after he was freed.

"After 25 years, come hug your mother," Patricia Fleming told her son, and he did.

Defense attorneys and prosecutors asked a Brooklyn judge to dismiss Fleming's conviction in the 1989 shooting. A key eyewitness recanted, new witnesses have implicated someone else and a review by prosecutors turned up a hotel receipt putting Fleming in Florida hours before the killing, defense lawyers Anthony Mayol and Taylor Koss said.

"I feel wonderful," Fleming said outside court. "I've always had faith. I knew that this day would come someday."

Asked about his plans, he said, "I'm going to go eat dinner with my mother and my family, and I'm going to live the rest of my life."

From the start, Fleming told authorities he had been in Orlando, Fla., when a friend, Darryl "Black" Rush, was shot to death in Brooklyn early on Aug. 15, 1989. Authorities suggested the shooting was motivated by a dispute over money.

Fleming had plane tickets, videos and postcards from his trip, his lawyers said, but authorities suggested he could have been in New York at the actual time of the shooting, and a woman testified that she had seen him shoot Rush.

The eyewitness recanted her testimony soon after Fleming's 1990 conviction, saying she had lied so police would cut her loose for an unrelated arrest, but Fleming lost his appeals.

The defense asked the DA's office to review the case last year.

Defense investigators found previously untapped witnesses who implicated someone else as the gunman, the attorneys said, declining to give the witnesses' or potential suspect's names before prosecutors investigate them.

And prosecutors' review produced a hotel receipt that Fleming paid in Florida about five hours before the shooting - a document that police evidently had since they found it in Fleming's pocket while arresting him, Mayol and Koss said.

Patricia Fleming, 79, was with her only son in Orlando at the time of the crime. She testified at his trial, but the jury didn't believe her. "I knew he didn't do it, because I was there," she said. "When they gave my son 25-to-life, I thought I would die in that courtroom."

Still, she said, "I never did give up because I knew he was innocent."

District Attorney Kenneth Thompson took office in January. In February, his office agreed to dismiss the murder convictions of two men who had spent more than 20 years in prison for three killings, saying newly discovered evidence had raised substantial doubts about their guilt.