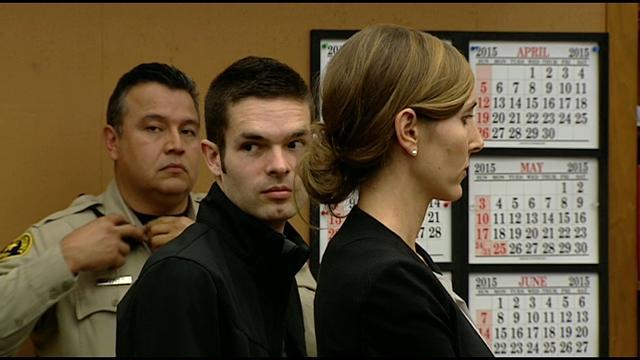 Kevin Bollaert, 28, was found guilty Monday of identity theft and extortion. He faces up to 20 years in prison.

The San Diego County Superior Court jury was unable to reach verdicts on two charges of identity theft and conspiracy and a judge declared a mistrial on the counts.

That law wasn't used against Ballaert.

Prosecutors said that in 2012 and 2013, Bollaert allowed people to anonymously post more than 10,000 images, mainly of women, on his now-defunct ugotposted.com website without the knowledge of those in the pictures. The victims' names, cities where they lived and other information such as links to their Facebook profiles also were posted, authorities alleged.

Bollaert also ran another now-defunct website, changemyreputation.com, where victims could go and be charged up to $350 to have the images removed.

Prosecutors said he earned tens of thousands of dollars from the scheme.

More than two dozen people were named as victims in the criminal complaint. Some testified at trial that they suffered humiliation and fear when their private photos were posted and prosecutor Tawnya Austin told jurors that they also were harassed by people who tried to contact them through Facebook or by email.

"It ruined my life and I'm still going through it," testified one woman, who said she was thrown out of her home after her nude photos were posted. "I lost my family. They think that I brought shame on them. My reputation is ruined."

At trial, prosecutors argued that Ballaert knew the images on his website were private and posted without consent of the victims, and described the business as essentially a blackmail scheme.

Bollaert's lawyer, Emily Rose-Weber, argued in court that her client may have conducted an immoral business that took advantage of "human weakness" but he didn't break the law by allowing others to post the explicit photos.

"It's gross, it's offensive, but it's not illegal," she said.