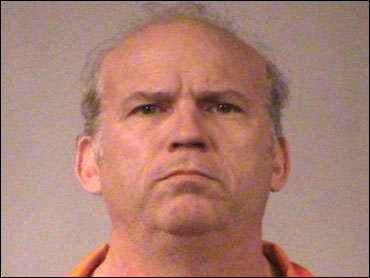 An activist abortion opponent was charged Tuesday with first-degree murder in the death of late-term abortion provider Dr. George Tiller, asking the judge by video when he would see his court-appointed lawyer.

Scott Roeder, 51, was shown via a video link from the Sedgwick County Jail. He fiddled with the charging documents on a podium in front of him, and said "OK," when Judge Ben Burgess read the charges.

Burgess ordered Roeder to be held without bond and said he was not allowed to communicate with Tiller's family. The judge told Roeder that he would be assigned a public defender.

Within two days, the judge answered to Roeder's only question in the brief appearance. A preliminary hearing is set for June 16.

Roeder is accused of shooting Tiller to death Sunday at the doctor's Lutheran church in Wichita as he was serving as an usher. Roeder also was charged with aggravated assault for allegedly threatening two people who tried to stop him.

Roeder was arrested about three hours after the shooting near Gardner, about 170 miles northeast of Wichita. His last known address is in Kansas City, Mo.

Roeder's family life began unraveling more than a decade ago when he got involved with anti-government groups, and then became "very religious in an Old Testament, eye-for-an-eye way," his former wife said.

"The anti-tax stuff came first, and then it grew and grew. He became very anti-abortion," said Lindsey Roeder, who was married to Scott Roeder for 10 years but "strongly disagrees with his beliefs." He moved out in 1994, and the couple divorced in 1996. They have one son, now 22.

"He started falling apart," Lindsey Roeder told The Associated Press on Monday. "I had to protect myself and my son."

Roeder's brother said he suffered from mental illness at various times in his life.

"However, none of us ever saw Scott as a person capable of or willing to take another person's life. Our deepest regrets, prayers and sympathy go out to the Tiller family during this terrible time," his brother, David, said in a statement.

Roeder's mental health and anti-government activities were also factors in a custody battle in Pennsylvania, The Kansas City Star reported Tuesday. Roeder sued in 2003 for the right to visit a girl he said was his daughter. The child was born in 2002. But the child's mother fought Roeder's request, saying he would not be a good influence because his association with "anti-government organizations is ongoing."

A 2005 court ruling also said Roeder had been diagnosed with schizophrenia and did not take medication, "which may pose a clear and present danger to the minor child," according to The Star.

Lindsey Roeder said from her home in a Kansas City suburb that the early years of the marriage were good and that Scott Roeder worked in an envelope factory. But she said he moved out of their home after he became involved with the Freemen movement, an anti-government group that discouraged the paying of taxes.

He then became involved with a church based on the Old Testament, but she said she did not know much about its beliefs. She thought it was strange when he showed up Friday to take their son out to dinner and to see the movie "Star Trek."

"That's his Sabbath," she said. "So we wouldn't usually see him on a Friday or Saturday. ... I think now, that he was saying goodbye."

In 1996, Roeder was arrested in Topeka after being stopped by sheriff's deputies because his car lacked a valid license plate. Instead, it bore a tag declaring him a "sovereign" and immune from state law. In the trunk, deputies found materials that could be assembled into a bomb.

He was convicted and sentenced to two years on probation and ordered to stop associating with violent anti-government groups. But the Kansas Court of Appeals overturned his conviction in 1997, ruling that authorities seized evidence against Roeder during an illegal search of his car.

"When they let him out because of the illegal search that made him even more self-righteous. He would say 'See, I'm right, and you're wrong,'" she said.

He was known by sight and license plate number to workers at a clinic in Kansas City, Kansas, where he had put glue in backdoor locks, most recently on Saturday, the day before Tiller's death, a clinic worker said Monday night.

Tiller's family announced Tuesday that there were no plans yet to reopen his Wichita clinic, despite earlier comments from Dr. LeRoy Carhart, one of four physicians who worked at the clinic. 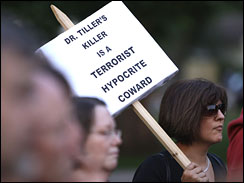 (AP Photo/Charlie Riedel)
(Left: Janet FitzGerald holds a sign during a candlelight vigil for Dr. George Tiller at a park in Lawrence, Kan., May 31, 2009.)

Carhart, 67, of Bellevue, Nebraska, had said Monday that the clinic would reopen next week. On Tuesday, he said he apparently misunderstood Tiller's wife, Jeanne Tiller, when she talked to the staff about the clinic's future on Monday. "I hope we can work this out with the Tiller family," Carhart said in a telephone interview from his Nebraska clinic.

Some anti-abortion activists said they were familiar with Roeder. Regina Dinwiddie, a protester in the Kansas City area, said she had picketed a Planned Parenthood clinic with Roeder. She said she was "glad" about Tiller's death.

"I wouldn't cry for him no more than I would if somebody dropped a rat and killed it," she said.

Police said it appears the gunman acted alone, and some anti-abortion groups quickly distanced themselves from the killing. Outside Tiller's clinic, the Kansas Coalition for Life placed signs saying members had prayed for Tiller's change of heart, "not his murder."

Dave Leach, publisher of the magazine Prayer and Action News, said he met Roeder about 15 years ago. A decade ago, Roeder subscribed to the quarterly magazine, which is published in Iowa and has said "justifiable homicide" against abortion providers can be supported, Leach said.

"Scott is not my hero in that sense; he has not inspired me to shoot an abortionist," Leach said in an e-mail. "But definitely, he will be the hero to thousands of babies who will not be slain because Scott sacrificed everything for them."

Some abortion clinics across the country responded to Tiller's death with increased security, while others said they would not discuss their security procedures.

In West Palm Beach, Florida, Monica Reis, founder of the Presidential Women's Center, said clinic staff "will continue to do what we always do, which is to be vigilant, to be aware, to be conscious."

Susan Hill, president of the National Women's Health Organization, which runs the only abortion clinic in Mississippi, said additional security measures have been taken at the Jackson clinic and officials have been in contact with the Justice Department.

"We will have even more security tomorrow," she said.