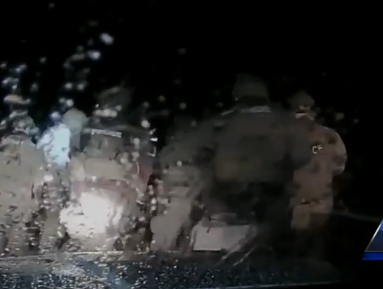 DALLAS COUNTY, Iowa -- A man charged in the deaths of a Des Moines couple found dead on Monday in the basement of a home allegedly shot the victims multiple times while they were sleeping before engaging in an hours-long standoff with police, according to the criminal complaint, as reported by CBS affiliate KCCI.

Authorities took 39-year-old Michael Wanchanic into custody after a more than hour standoff along Highway 141 Tuesday that involved at least 30 officers. He was charged with two counts of first-degree murder in the deaths of Bryon Howard, 36, and Heather Belieu, 31, who was holding a baby in her arms when she was allegedly shot in her sleep.

Dallas County Sheriff Chad Leonard said Wanchanic fled in the van with the officer in pursuit but when Wanchanic got back to Highway 141, the minivan died, stranding Wanchanic on the highway. Dallas County authorities decided to wait him out because they suspected he had a weapon, the station reported.

"He had a gun and he was threatening to take his own life," said Dallas County Sheriff Chad Leonard, according to the station.

A Dallas County emergency negotiator communicated with Wanchanic over the loudspeaker in a law enforcement vehicle. Sheriff Leonard says Wanchanic ultimately got cold and surrendered around 10:30 p.m. Tuesday.

Leonard said the suspect tossed a handgun onto the highway, exited the vehicle and sat down on the pavement, according to the station.

"I think he just got too cold sitting in there any longer and he eventually got out on his own and gave up," said Leonard.

The suspect shot Heather multiple times while she was asleep with her infant in her arms, according to the complaint, which says the shooter got the gun out of a case in his stepmother's room. Wanchanic lived in the home but was not related to the victims.

He's being held in the Polk County Jail with no bond.