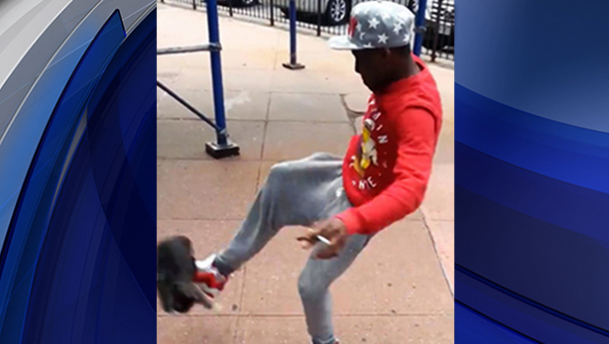 NEW YORK - This is not your typical cute cat video gone viral.

A man seen on video luring a stray cat, patting the cat on the head and then viciously kicking it in the stomach- sending the feline sailing 20 feet through the air -- was arrested Monday afternoon, CBS New York reported.

Andre Robinson, 21, was busted after the video was posted Friday on Facebook and caused an uproar among animal lovers.

He was arrested and charged with aggravated animal cruelty. He was released without bail and ordered to return to court on June 9.

Robinson has a lengthy arrest record, which includes a knife-point robbery, according to 1010 WINS, CBS Radio in New York.

Robinson's mother, Mary Kirby, told the Daily News her son is an animal lover, so for him to do this he must have been "high on something."

The gray and white cat -- a stray known to some local residents as "King" -- disappeared for a few days but was trapped Tuesday by animal rescuers and taken to a veterinarian, the Daily News said. It will be put up for adoption if it is healthy, the North Shore Animal League said.