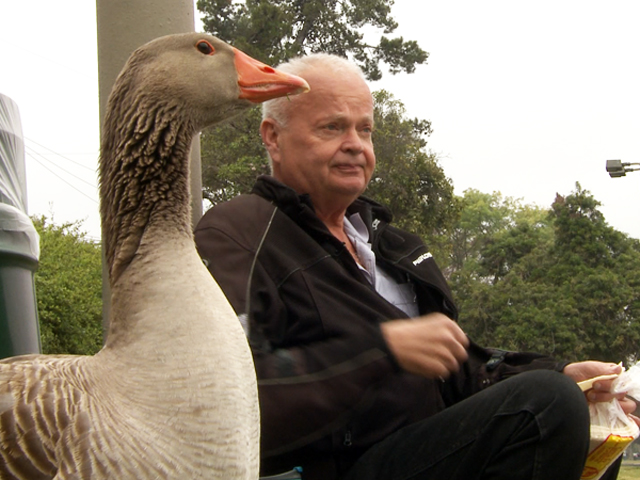 LOS ANGELES - When dawn breaks in Echo Park near downtown Los Angeles, the geese that live here begin their daily routines. Some go for a swim, some walk and peck for food, and some walk and peck at walkers - basically same stuff that geese do everywhere.

But, as CBS News correspondent Steve Hartman reports, there is one goose here with a ritual all her own. Every morning, her priority is to stand by the side of the road and patiently wait for her mate to return - on his scooter.

She is a gray Toulouse goose named Maria. He is a retired salesman named Dominic Ehrler. And together, they have become the talk of Echo Park.

"They walk around the park together like they're in love," said one park-goer. "It's wonderful."

"People would look at us like - what is this?" Ehrler said.

"What, they've never seen a guy walking with a goose before?" Hartman said.

It all started about 10 months ago when Maria simply started following Dominic. He wasn't feeding her. He wasn't coaxing her. He was just one of probably a thousand people who walk around the lake every day. But there was something about his waddle that did it for Maria and she's been smitten ever since.

"She thinks that she owns me," Ehrler said. "The other geese are not allowed to be near me on account of Maria."

It's not just other geese. Maria doesn't want any species stealing her man.

"I've seen her go up and scare the heck out of pit bulls," Ehrler said. "Maria, be nice, don't bite the dog."

Possessive as she is -- if Dom's not around, Maria has no problem socializing with other men. In fact, she has a particular fondness for rock stars. When the group OK GO shot a video at the park recently, the director had such a hard time getting Maria to leave the stars alone, he ended-up just making her one of them (go 2:20 into the video.)

But that was one-day fling. By and large, Maria is a one-man goose.

"She'd go home with me," Ehrler said. "I have no doubt in my mind." He knows because she tries - almost every day she tries. He'll take off on his scooter and Maria will be right there - right by his side - Dom's devoted wingman.

Although Ehrler is a bachelor, he says he'd not ready for a live-in goose friend. So he returns to the park and either has someone keep Maria behind a gate long enough for him to sneak away - or, often times, he'll simply sit at a bench and wait for Maria to fall asleep.

Ehrler said it's changed him. "I quit eating poultry. I never had that much respect for them, I figured all birds were dumb - this has changed all that."

They've always said love has no bounds. But now, we have proof thanks to one devoted love bird, and a goose.

As close as they are, it's going to be a tough year for Dominic and Maria. In a few months, the city will drain the lake for a clean-up project. Maria will be temporarily relocated. We're not sure where yet -- but hopefully within scooter distance.

Maria is now temporarily at the Los Angeles Zoo. She is quarantined there for the time being. She is expected to return to Echo Park Lake when the restoration project is completed.