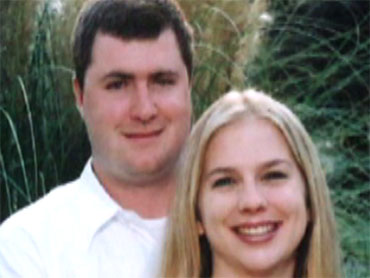 A man charged with drowning his new bride on their honeymoon in Australia has been returned to the couple's home state of Alabama.

Watson, 33, arrived back in Birmingham Monday night from Los Angeles, where he had been jailed since returning to the U.S. from Australia 12 days ago.

"He's coming back to Alabama to fight, and he's going to prove his innocence before all this over," says Watson's lawyer, Joseph J. Basgier III.

Watson is accused in the drowning of 26 year-old Tina Watson in 2003, while they were scuba diving at the Great Barrier Reef during their honeymoon.

An underwater photograph captured a lifeless Tina Watson, her arms raised toward the surface, lying helpless on the ocean floor.

The Watsons had been married only 11 days when, police say, Gabe Watson killed Tina to cash in on a small insurance policy.

Australian police say they believe Gabe Watson cut off Tina's air supply while giving her a bear hug underwater. Then, they contend, he watched her sink to the ocean floor.

Watson served an 18-month sentence in Australia for manslaughter as part of a plea deal.

"He essentially plead guilty to not doing enough to help Tina while she was in the water," says Basgier. "(It) certainly was nothing that had anything to do with intentional conduct or intentional murder, which is what he's charged with in Alabama."

Prosecutors there say Watson's punishment in Australia was too lenient, and they think they can get a murder conviction against Watson on U.S. soil. They have indicated they will seek the death penalty.