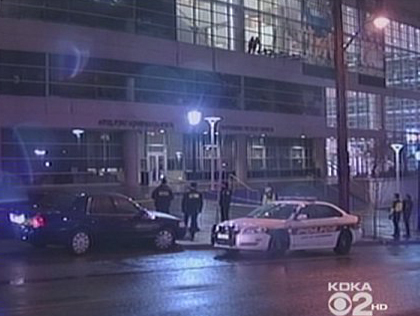 PITTSBURGH - A man plunged to his death after police say he crashed through a window at an arena on the campus of the University of Pittsburgh during a concert.

The Allegheny County medical examiner's office identified the man as 19-year-old Joseph Kimutis, of McDonald. He had been rushed to a hospital after smashing through a window at the Peterson Events Center and falling about 30 feet on Wednesday night.

Pittsburgh police are checking on a report that Kimutis got down in a football stance, yelled "hike," and then charged toward the window.

"He just come running out and just dove right out the window," concert-goer Joe Ninehauser told CBS affiliate KDKA. "Immediately, there was tons of people on the scene. It was a sad sight."

"It really was a surreal feeling because you're at a concert to have fun," said another concert-goer. "I saw some police that were looking at sort of the scene, and when I peeked over I saw this huge hole in the glass window and I knew that there was a long distance to fall."

Authorities said they believe that the glass was at least one-inch thick.

"He seemed to be a little - I don't know what the term is - but he seemed to be a little out of it at the time and he may have done that, but that's not for sure at this time," Pittsburgh Police Lt. Daniel Herrmann said Wednesday night at the scene. "We just know that he did hit the window and we're looking for actual witnesses that saw this."

The concert was not interrupted.