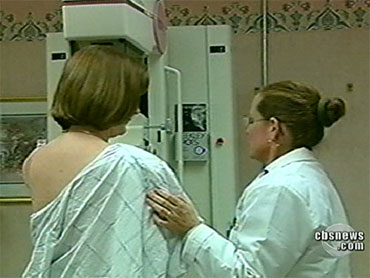 Mammograms don't help women over 50 as much as has been believed, new research suggests.

Only a third of the reduced risk of death credited to breast cancer screening is actually deserved -- the rest is due to better treatment and greater awareness of the disease, a large study in Norway found.

The research, published in Thursday's New England Journal of Medicine, is the latest to show that the benefits of mammography are modest.

"It's not the great lifesaver that people think it is. It's not a magic bullet," said Georgetown University researcher Dr. Jeanne Mandelblatt, who was not involved in the study.

Mandelblatt headed six teams that helped shape the new mammogram guidelines issued last year by an influential government task force. The U.S. Preventive Services Task Force concluded that women at average risk for breast cancer don't need mammograms in their 40s and should get one just every two years starting at 50.

The World Health Organization estimates that mammograms reduce the breast cancer death rate by 25 percent in women over 50. Other groups put the figure at 15 to 23 percent.

The latest study found that, while mammograms cut the risk of dying, the benefit was disappointingly low. Women who were screened had a 10 percent lower risk of death from breast cancer, but only a third of that reduction was due to screening itself.

Some 2,500 women would have to be regularly screened over 10 years to save one life from breast cancer, Dr. H. Gilbert Welch of Dartmouth Medical School noted in an accompanying editorial.

"Is this (what the study found) due to better treatment? Is it a negative on the value of diagnosis or screening with mammogram? Is it because these were older women? Do they need longer follow-up? All of those remain questions that need further study," CBS News Medical Correspondent Dr. Jennifer Ashton said on "The Early Show" Thursday.

Ashton, a practicing obstetrician/gynecologist, said she won't be changing her recommendations to her patients "in light of this study. I will continue to discuss the risks of screening versus the risds of not screening versus the benefits and help the patient come to a conclusion."

In the study, scientists were able to tease out the benefits of mammography by studying Norway's breast cancer screening program, which began as a pilot in 1996 and later expanded to the entire country. As part of the national screening program, teams of doctors were set up in every county to treat any breast cancer cases that did occur, whether they were found by mammograms or other ways.

Some 40,000 women with breast cancer were included in the study. Women ages 50 through 69 were offered screening every two years.

Researchers compared the breast cancer death rate in four groups: a screening group of women living in areas where mammograms were offered; a non-screening group in regions that did not have screening; and two comparison groups of women from the decade before the screening program began, from the same counties as the women in the other two groups.

This allowed researchers to separate the effects of mammography from other factors that may have an impact on survival such as improved treatment and increased awareness.

That means that mammography reduced mortality by only 2.4 deaths per 100,000 people - a third of the total risk of death.

A second part of the study bore this out: Women over 70, who weren't eligible for screening, had an 8 percent lower risk of dying from breast cancer compared to the previous decade, pointing to the benefit of better care.

The study was funded by the Cancer Registry of Norway and the Research Council of Norway. It was led by Dr. Mette Kalager of Oslo University Hospital with collaboration from Harvard University and the Dana-Farber Cancer Institute.

More than 1 million women worldwide are diagnosed with breast cancer each year and more than 500,000 die from it. In the United States last year, there were an estimated 194,280 new cases and 40,610 deaths from the disease.

The American Cancer Society has long advocated that women get annual breast cancer screenings starting at 40.

The small benefit of mammograms in the latest study may be because the women weren't followed long enough, suggested Otis Brawley, the cancer society's chief medical officer, in a statement.

"The total body of the science supports the fact that regular mammography is an important part of a woman's preventive health care," Brawley said. "Following the American Cancer Society's guidelines for the early detection of breast cancer improves the chances that breast cancer can be diagnosed at an early stage and treated successfully."