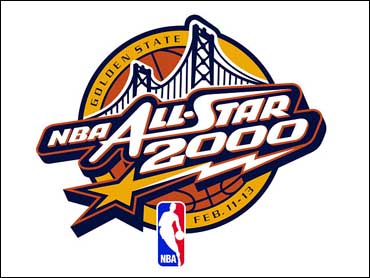 Karl Malone wasn't around Friday to view a scene that would have made his stomach turn: A crowd at least 60 gathered around Vince Carter, while at the next table only six wanted to talk with John Stockton.

Malone skipped media day Friday as All-Star weekend got under way, choosing to remain at his ranch on the Arkansas-Louisiana border with his family.

There was doubt as to whether he'd show for Sunday's game.

"I'm still not sure if he's coming," Stockton said. "I don't know what battle he's fighting."

Malone, who has expressed a distaste for the way the NBA is promoting its younger players instead of its veterans, had tried to back out of All-Star weekend by claiming he wanted to recover from nagging injuries. But the league wasn't buying his excuse, and Malone was facing a possible five-game suspension if he failed to show for Sunday's game.

The focus on the new generation, a so-called changing of the guard, was the hot topic as the NBA got ready for its first All-Star weekend since 1998. The showcase event was canceled last season because of the lockout.

There are nine first-time All-Stars this year, with 14 players 27 or younger.

Only one starter, Alonzo Mourning, is 30.

"I don't feel like an old fogey, but an elder statesman? Yes," said Reggie Miller, who at 34 is the fourth-oldest All-Star behind Stockton, Malone and David Robinson.

"You've got to promote the younger players because they are the future," Miller said, "and I think Karl has to face the realization that it's a young man's game, and the league will go on."

Miller got a kick out of some of the fashions on display as most of the All-Star participants gathered in a large hotel ballroom. Baggy jeans and baggier slacks were the preferred pants of the younger players, while headwear ranged from Jason Williams' slightly askew yellow Vikings cap to Larry Hughes, he of the 13 tattoos, wearing a ski cap over a doo-rag covering his cornrows.

Allen Iverson wore a camouflage headband and probably a million dollars worth of diamonds on two necklaces, a watch, wristband, earrings and a pinkie ring.

"I never would have worn that much jewelry," Miller said.

Carter might have been the busiest All-Starcoming in as leading vote-getter among all players and the heavy favorite to win the slam dunk contest. With his mother in tow, his Friday itinerary included taped interviews with the big networks, an appearance at a school in Oakland, the media session in San Francisco and a player meeting. His schedule was so tight, in fact, that he canceled a planned runway appearance at a fashion show put on by players' wives.

"The league is about change," Mourning said. "They're pushing this new generation to the forefront. I feel like the old man on the totem pole, and I'm only turning 30."

Bryant was the player who began Malone's descent into generational jealousy in the last All-Star game in New York when Malone went to set a pick for Bryant and the youngster waved him off.

Malone took it as a blatant act of disrespect from the then-19-year-old Bryant to one of his elders. He even vowed that he had played in his last All-Star game.

"I just hope he shows," said Stockton, who was concerned about the consequences a five-game suspension would have on the Jazz.

Malone's agent and Utah owner Larry Miller have said Malone will show up Sunday, but Malone has said nothing definitive.

"He's such a huge part of our team, we can't afford to miss him. Regardless of what his feelings are, he's very important to the league and I hope he comes and plays," Stockton said.

Bryant said he doesn't regret waving off Malone and even joked with him that he'd do it again during practice Saturday.

But with Malone expected to miss that, too, Bryant could only wonder about his elder. Asked if he had any message for the missing Mailman, Bryant said: "Thank you. Thank you for all you've done."

"When we were coming up, we idolized him, Michael and Magic. Watching him play brings back so many memories. I hophe comes."