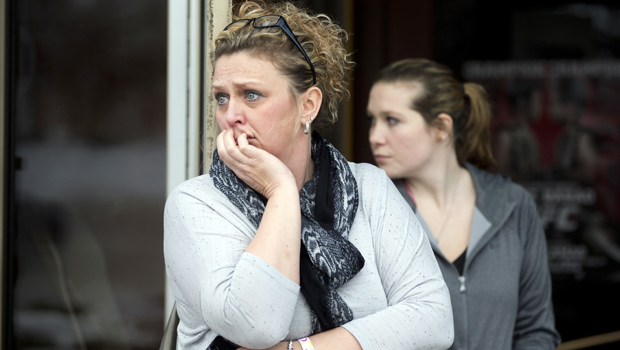 COLUMBIA, Md. -- A man carrying a shotgun opened fire at a busy shopping mall in suburban Baltimore on Saturday, killing two employees of a skate shop and then himself as panicked shoppers ran for cover, police said. Five others were injured.

Police were still trying to determine the identity and motive of the gunman who killed a man and a woman, both in their 20s, at a skate shop called Zumiez on the upper level of the Mall in Columbia.

Saphone Lilly was one of the survivors of the shooting, CBS News correspondent Jeff Pegues reports from Columbia. She said the shooter was young and firing randomly.

Lilly was outside the hospital when she told CBS News that the gunman shot at her too.

"The shooter looked straight at me from the second-floor level and shot," said Lilly. "First time, I ducked. The plaster wall came all over me. I moved my niece out the way. My girlfriend was there, and he shot again."

Many shoppers found cover in stockrooms and barricaded themselves until the arrival of police, who searched store to store. By late afternoon, the mall had been cleared of shoppers and employees.

Howard County Police Chief William J. McMahon said at a news conference that authorities had difficulty identifying the gunman because of concerns he might be carrying explosives and were proceeding with an "abundance of caution."

"We do not know yet what caused the shooting incident," he said. "We do not have a motive."

By late Saturday, police said they had tentatively identified the gunman but declined to release his name while they followed up on leads.

A news release Saturday night said that police found and disabled "two crude devices that appeared to be an attempt at making explosives using fireworks." Police were searching the mall with dogs overnight, which is standard procedure, and the mall was to remain closed Sunday.

Authorities received a 911 call at around 11:15 a.m. to report a shooting at the mall. Police responded to the scene within 2 minutes and found three people dead - including the apparent gunman near a gun and ammunition - either inside or outside the shop, which sells skateboards, clothing and accessories. McMahon said police were confident there was a single gunman.

Benlolo's grandfather, John Feins, said in a telephone interview from Florida with The Associated Press that his granddaughter had a 2-year-old son and that the job at Zumiez was her first since she went back to work after her son's birth.

"She was all excited because she was the manager there," he said.

He said he had spoken with his daughter, Brianna's mother, earlier in the day, but didn't know who the gunman was or whether the person knew his granddaughter.

"It's senseless. It's totally, totally senseless," he said.

He described his daughter's family as a military family that had moved frequently and had been in Colorado before moving to Maryland about two years ago. He said his granddaughter was on good terms with her son's father, and they shared custody.
"I mean what can you say? You go to work and make a dollar and you got some idiot coming in and blowing people away," he said.

Zumiez CEO Rick Brooks released a statement that the company is making counseling available for employees in the area.

"The Zumiez team is a tight knit community and all of our hearts go out to Brianna and Tyler's families," he wrote.

Howard County General Hospital said it had treated and released five patients. One patient had a gunshot wound, while at least three other patients sustained other injuries.

The mall is at the center of the town that's a suburb of both Baltimore and Washington, and it typically opens at 10 a.m. on Saturdays. It was busy with shoppers and employees when the shots rang out before noon.
Joan Harding of Elkridge, Md., was shopping with her husband, David, for a tiara for their granddaughter's 18th birthday. She said she heard something heavy falling, followed by gunshots and people running.

"My husband said, 'Get down!' and the girl that worked in the store said, 'Get in the back,'" Harding said. That is where they hid until police searched the mall and signaled it was safe to leave.

The mall was closed to the public as police looked in each store for people who might still be hiding, McMahon said. It will remain closed at least through the night.

McMahon said it wasn't clear whether the gunman and victims knew each other. He said officers did not fire any shots when they arrived at the scene. Asked if the gunman shot himself, the chief answered: "That is certainly what it appears to be at this point."

Tonya Broughton of Silver Spring, Md., was with a friend getting facials for a "girls' morning out," she said. "The only thing I heard was all the people running and screaming and saying 'There's a shooter! There's a shooter!'" she said.

Wearing a gel face mask, she and her friend hid in a Victoria's Secret store.

People were directed out of the mall and into a parking lot, where some boarded a bus and others walked toward their cars. Some people were seen crying. McMahon said detectives were interviewing witnesses as they emerged from the mall.
Laura McKindles of Columbia works at a kiosk in the mall. She said she heard between eight and 10 gunshots, followed by people running and screaming. She ran into the backroom of a perfume store and locked the door.

Allison Cohen, who works at the apparel store Lucky Brand Jeans, said she always felt safe at the mall.

"I truly never thought something like this would ever happen here," Cohen said. "It's really, really shocking."