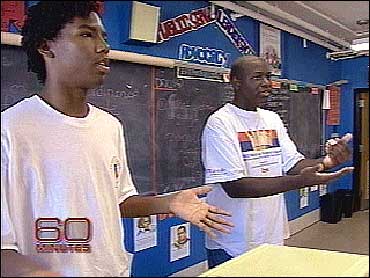 Being on the high school debating team had pretty much gone out of style among American teenagers. But now, debate is making a comeback -- not just in white upper class suburbs where you might expect it, but also in inner cities.

In the last six years, 12,000 students across the United States have joined what are called urban debate leagues -- supported by educators who believe debating is a better learning tool for urban students than anything else they've tried.

Unlike what we're used to from political candidates, high school debaters face off for an hour and a half with no moderator to keep order, just a judge who decides the winner.

High school debates take place every weekend in nearly empty classrooms. The only audience is a judge. And two sides -- two to each team -- square off.

Today's subject: Should mentally ill prisoners be treated while in jail? Marie Bentley, a Wallbrook Warrior, is arguing the affirmative. She says that treating prisoners will prevent recidivism.

"Recidivism is a circle, is a revolving door," says Marie. "That's just basically what recidivism is."

Before she joined the Warriors, Marie was coming to school only once or twice a week. Now she wants to go to the police academy.

In another room, Regina Summers is representing the negative, arguing against treatment for prisoners.

"You're medicating a person and you're forcefully injecting something into them," says Regina. "It's chemically imbalancing your brain."

Before she joined the debating team, Regina was thinking about dropping out of school. Now she wants to become a Supreme Court justice.

They're all members of the Warriors. At first they were considered the school geeks. Now, being a debater is "cool," but hard work.

They say they learn more at debate than they do in class. What are some of the words that they've learned, words that now roll off their tongue?

Most of the students at Walbrook High School come from low-income families --many from broken homes. Can debate change the odds for them?

Angelo Brooks, the team's coach, thinks it can -- and already has.

"You know, that same child who couldn't read three or four sentences now can read ten to twelve pages in eight minutes," says Brooks, who's also a Baltimore police officer. "These young people spend a tremendous amount of time in debate."

What are they doing all that time?

"They're doing research. They build their cases, and you know, they practice," says Brooks.

Brooks teaches criminal justice classes during the day and coaches the debate team after school. He does both in full uniform, including a loaded gun.

"Alright, wipe the slob off your mouth and off the pen," says Brooks, laughing. "And don't nobody borrow each other's pens."

Twice a week at practice, Brooks teaches debate tactics like how to make an effective rebuttal. "They bring up another argument, you raise how many more arguments?"

"Like 10," responds a student. "Exactly," says Brooks. "They raise two, you raise six. And you keep on. You don't stop. That's debate history."

Brooks says his students have overcome tremendous adversities like child and sexual abuse, and drugs in the family. A cop in the classroom, he's so committed to making a difference that he let a kid who was a gang member and a drug dealer join the team.

As a policeman, is there a conflict in doing this?

"It is a conflict. But we can't arrest ourselves out of the problems that exist in society," says Brooks. Did he turn the dealer around? He isn't sure, but at least the student graduated.

Early one Saturday morning, Brooks takes the team to a tournament at a nearby high school. As the reigning champs, the Walbrook Warriors are the ones to beat.

"Get your evidence out, pair up, go over your stuff and relax," Brooks tells the team.

These kids are as pumped up as any athletes before a big game. The teenage adrenalin is running so high that some of the kids need settling down.

"Ya know, you just gotta concentrate a little more, and make a little bit of a commitment," says Brooks.

The postings go up. This is when the debaters find out for the first time which side, affirmative or negative, they'll be arguing. Then they're off to the debating rooms with their bins of evidence.

Each year, every single high school debate team in the country deals with the same topic. Last year it was weapons of mass destruction. This year: "Should the federal government substantially increase funding for mental health care?"

In order to win the debate, the Warriors have to jam in more evidence than their opponents in the allotted time. That means Jarrell Anderson has to read his opening argument at warp speed. "Federal funds – funds -- do not support institutions for people with mental illness," says Jarrell. "Those states cannot move to -- their funding to the community."

What he's arguing is that the mentally ill are better off being treated in the community than in institutions. Then he undergoes cross-examination by his opponent.

"You're saying transfer them to community-based health care centers," his opponent says. "But this is still institution which you're putting them in."

"My question to you is, isn't a community-based health care center still an institution," says his opponent.

Team members like Regina say they get a rush thinking on their feet. Here she's arguing against an increase in spending for mental health.

Do you have to be really smart to be a good debater?

"It's a lot of work, but it's fun," says Eric Beale. Brooks accepted Eric Beale onto the team when he was in the tenth grade. He was a Special Ed student, reading at a fifth grade level.

"Kids made fun of him when he read out loud," remembers Brooks. "He never, you know, let it break his spirit. He kept right on."

"I'm much better at that now. Officer Brooks helped me in tremendous ways," says Eric. "Every day, I went home, I worked two hours reading, doing research. I worked hard to get where I'm at today."

After two years of debate, Eric tested out of Special Ed. He now reads at his grade level and is applying to college.

"It taught me never to believe what other people say about me, never to sit back and put myself down," says Eric, who considers the team his family.

As part of the family, Brooks plays the part of the dad many of them don't have. Married, but with no children of his own, he spends all of the small stipend he gets for coaching, and more of his own money on the team. And he often ends up dealing with the kids' personal problems.

"Four o'clock in the morning, I'm calling Officer Brooks. Office Brooks, I'm havin' trouble in my home," says Regina. Brooks always answers. "No matter what time you call him, it's like, he's always there for you."

The original concept was that the inner city students would compete only amongst themselves. But coach Brooks takes his team to tournaments against suburban schools where parents hire private coaches and pay to send their kids to debate camps.

At the suburban debates, it's his kids with their one bin of research versus tubs and mounds of materials on the other side. It was obvious that first time they were going to lose.

"I told them, 'Well, there's a lesson in a loss.' They came back, they worked harder, they made corrections," says Brooks. "They improved, and then they started winning."

Now, they're anything but intimidated.

Tor Debella is Captain of Loyola Blakefield, the top suburban team in the area: "I think a lot of other people have the misconception that maybe they'll be easier. I mean they are, by far, our toughest competition."

Debella believes the Warriors are tougher competition than other suburban and private schools.

If debating is a way to improve inner city schools, it's only reaching a small number of students. One answer is to introduce it into every classroom so kids would debate the pros and cons of a piece of literature, or a scientific theory.

"You give them this vehicle and this ability to refocus their energy from destructive and constructive, they're unstoppable," says Brooks.

And they were unstoppable back on their home turf, at the Urban Debate League's Tournament, when they took the prize for overall best team.

But for Brooks the bigger prize is that his seniors, all but one so far, have gone onto college, some on full scholarship.

"If I wanted to, to say to kids in the inner cities, 'Go out for debate, it's so great.' But what if they don't have an Officer Brooks? Is debate by itself gonna change lives," asks Brooks. His students think so.

"You might get beat up and knocked around a couple of times in debate, but if you keep doing it, yes, it can change your life," says Shannon.

"Not only that, you learn things that I never would have ever learned in my life, you know. And it just feels so good. It makes you feel really good about yourself."

The private money that launched the urban debate leagues is running out. The Baltimore Urban Debate League has asked the city, which provides millions of dollars to high school sports, to put money for debate into the annual budget. So far, to no avail.

By the way, coach Brooks tells us all 12 seniors on the Walbrook Debate Team graduated this spring, and nine of them are going on to college.

In China, an electric car lifestyle
Thanks for reading CBS NEWS.
Create your free account or log in
for more features.
View CBS News In
CBS News App Open
Chrome Safari Continue
Be the first to know
Get browser notifications for breaking news, live events, and exclusive reporting.