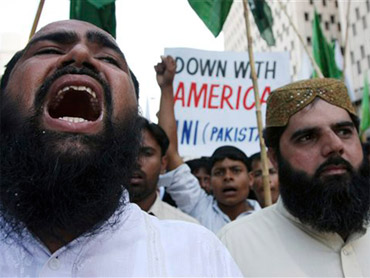 While you were waiting in line for the new "Harry Potter" book late last week, or simply waiting by your mailbox for it to arrive by owl post, two important things happened on the legal front in our war against terrorism. Announced within hours of one another on Friday, they span the widening gulf between conflicting legal and moral priorities while mirroring the embarrassing push-and-pull of our nation's terror law policies.

First, President Bush took the shackles off the CIA's interrogation program (no doubt ensuring that those shackles soon would be placed upon more terror suspects) by signing an executive order that now stands as America's definitive (if not exactly defined) word to the world about what rules we'll follow when it comes to interrogating men captured as CIA terror suspects. Sure we'll comply, the order says, but we can't tell you how or when or why or with whom. That's classified. But trust us.

Congress gave the White House the convenient power to interpret the scope of its own profound duties and responsibilities under Article 3 of the Conventions when the lawmakers passed the Military Commissions Act of 2006. That dubious late-year measure was, in turn, designed to get around a U.S. Supreme Court ruling last summer that rejected the heavy-handed rules the military had set up to process the men out of Guantanamo Bay, Cuba.

Purporting to solve once and for all the problems of prosecuting the terror detainees at Guantanamo Bay, the Commissions Act stripped away important habeas corpus protections — protections guaranteeing access to the courts to question government detention — not just for the wretched men at Gitmo but also for other people legally present in the United States. And the tribunal rules for the detainees still weren't fair enough. So the Act in the end merely has delayed until next year, or the year after that, a workable plan to fairly and quickly process the men.

Why so gloomy a prediction? Because of the second "terror law" event which came our way Friday. A three-judge panel of the D.C. Circuit Court of Appeals unanimously declared under the Commissions Act and other precedent that the executive branch must share with judges (and on some occasions with representatives of the defendants) all of the evidence that military officials and judges were (or were not) using to classify Gitmo's terror law suspects as "enemy combatants."

We can't properly judge appeals from Gitmo, the judges ruled, if we don't have access to all of the evidence "any more than one can tell whether a fraction is more or less than one-half by looking only at the numerator and not at the denominator." The judges also reminded federal officials that it is the job of the judiciary, and not military officials, to decide when evidence or material relevant to a case ought to be sealed. Just read the 29-page decision and then try to argue with a straight face that the latest, greatest rules well and fairly and efficiently govern the prosecution of the detainees

They do not. That's why the federal appeals court judges (two of whom are Republican appointees) entered a complex discovery order almost certain to be appealed on behalf of the Defense Department by the Justice Department. The Supreme Court already has agreed to hear a case involving another, broader challenge to the Military Commissions Act and there is no guarantee that the justices will be willing to consolidate that case with this one. We are, therefore, just about where we were two years ago, and four years ago: stuck paying the bill for hundreds of men, many of whom are not terrorists, and few of whom are wanted by their own countries.

Why? Because the Commissions Act and its predecessor statute granted too much power to the executive branch and didn't go nearly far enough in making the judiciary reasonable (never mind equal) partners in the process. Sound familiar? That's the unhappy formula, too, for the president's new order on interrogations — great power given to CIA interrogators, great legal protections granted to them in case they are sued, and little room for resolute checks and balances within the judicial system (or anywhere else) that might discourage if not preclude individual instances of cruelty or systemic abuses of the sort we saw at Abu Ghraib.

So on the same day that a federal appeals court told the executive branch that it was going too far with detainee rules, the executive branch went too far with interrogation methods. It's too late now to believe that this recklessly zealous strategy is unintentional — that the White House doesn't understand it still must operate even in this time of terror within a system of government that believes in and thrives on the separation of powers. No, White House officials get it and still don't care; understand that they probably should by rights involve the courts more in the war on terror but don't want to cede even a tiny space from the vast expanse of power they have horded for themselves since the Twin Towers fell.

What capped the day, what linked the failed policy of the past (the Commissions Act) with the doomed policy of the present (the new executive order) was the "conference call with senior administration officials" offered late Friday by the Justice Department to help reporters try to understand the scope and context of the new directive. Here's how "Senior Administration Official One" answered the first question asked of him/her: "I'm not in a position to talk about any specific interrogation practices." Here is how he/she answered the second question asked: "I really can't answer those questions." His/her answer to Question Number Three? "I think I'm probably not in a position to talk about that."

You get the idea. There is little reason to trust and no way to verify that the CIA actually will conduct itself in a manner befitting an American enterprise abroad. And, despite Friday's court order, there is little hope that the federal judiciary will ever be allowed by enough far-sighted leaders in the other two branches to become true partners in the legal war on terrorism. We were making these same mistakes — we were striking this same imbalance — five years ago, before we had reason to know better. There is no excuse to be doing it now.