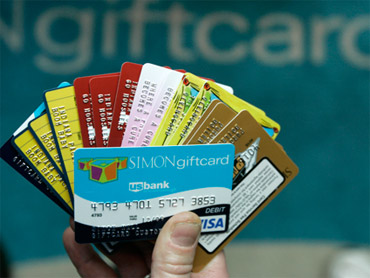 Gift cards were among people's favorite presents again this year. Analysts project that holiday shoppers will have bought $91 billion dollars worth of them when all is said and done - up six percent from last year.

But what if you don't like the ones you received?

SmartMoney.com Senior Consumer Reporter Kelli Grant offered suggestions on "The Early Show" Thursday for how you can dispose of them and get money or stuff you want back in return.

First off, the best way to get full value for your card is to swap it with someone who does. Someone Kelli knows just did that, giving a family member $25 cash for their card at a store he shops at. Or, if you're on vacation with the whole family, and everyone got cards as stocking stuffers, and you and your brother want to trade -- go for it! Just do it discreetly.

Get money online in exchange for an unwanted gift card

Websites to check out:

Protecting Your Hair This Summer

Get up to 90 percent back via check or PayPal: You can get really good value if it's a popular store; if it's a regional store or a place where no one really goes, the turnaround value could be less. On the lower end, they might offer 50 percent for the card. But on the higher end, it could be 70 - 90 percent. The way that it works is you mail the site the card, they verify the balance, and then they pay you -- you can select how - by check or with PayPal.

Exchange your card for other cards: Some sites will offer you Amazon.com cards, which is great, because they sell pretty much everything at this point

Be aware: Your card doesn't even have to be full. Even if you've partially used it, you can generally still use it -- most places want you to have a minimum of just $20 or something. So that's good if you got a really large gift card and you just can't imagine spending the money remaining on it on anything else.

Before you send your card in, make sure you write down its number (which is usually on the back). These cards can be so anonymous these days, that's really the only way to track them, and many retailers will still let you use the value on the card if you at least still tell them the number, even if you don't have the card. There's also an app now that can track the card for you. So this way, even if it gets lost, you can still use it!

If you're a little nervous about sending your card away - there are other options:

Post on eBay: It's hard to profit from your gift card, but eBay may get you kind of close. If you put the unwanted card up, you have a reserve, so you control how much it goes for. Before you put it up, though, see what similar gift cards are selling for, so you have a realistic sense of what it could try for. That being said, if there aren't any other cards of your brand up there, that might not be so bad, either -- there won't be too much competition.

Check-cashing locations: You can also go to a check-cashing place if you want fast cash. The rates aren't great -- you're getting a flat rate of something like 50 percent -- but if you'd rather have the money now, it's a good option.

Re-gift!: Don't forget about the art of re-gifting. And, thanks to the new legislation, it's easier to hang onto gift cards until later in the year to pass on without fear of inactivity fees or expiration dates -- so you can honestly put it back in your stocking drawer until next Christmas. You just have to read the fine print, or call the number on the back of the card to find out.