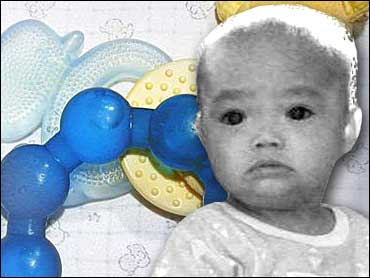 Teething can be a difficult time for both infants and their parents. Dr. Steven Miller, head of the pediatric emergency room at The Morgan Stanley Children's Hospital of New York Presbyterian, visited The Early Show with tips on spotting the process early and soothing your child appropriately.

Babies can begin teething as early as 4 months and the entire process, says Miller, can last for years. In some cases, however, there may be a great deal of variation in terms of patterns of heredity—some children's teeth, for example, don't erupt until they've reached close to 1 year or even later.

Before teething begins and teeth become apparent, there are signs the process is starting. A lot of babies will become a little more irritable. Not shrieking, necessarily, but maybe crying and acting cranky. There are some babies that are hardwired to be more vocal than others, so some babies may not show signs of being in pain at all. Most babies will either put their hands in their mouths or use their hands to put other things in their mouths. You may also notice that baby seems to be having a bad day. Not a terrible day, but a bad day that's similar to other days where he or she might be fussy for minor reasons.

Ear pulling is also a sign, and many parents mistake teething for ear infections. The nerve endings in the mouth refer back to the ears, so if there's any pain in the mouth the baby may pull his ears.

The entire teething process can last until age 2 or 3, though the part doctors actually refer to as "teething" occurs between 4 months to a year. Symptoms come and go - for each tooth that erupts, the baby may show signs of discomfort.

Martin dispels the old wives' tale that teething causes fever, rash or diarrhea. Martin stresses that when he refers to the symptoms of teething, he's talking about generally pretty mild symptoms.

You should be able to tell if your baby is mildly annoyed versus totally different behavior than you're not accustomed to seeing in him. The baby might be acting in a way that indicates he's never had this feeling before, which is normal. But if your child is inconsolable and acting very differently, Martin advises you call your doctor. Additionally, if your child has a fever, rash or diarrhea you should call your doctor.

Martin often sees anxious parents in the pediatric ER complaining that their child is sleeping poorly and crying excessively. Oftentimes it turns out the baby is teething. There are, however, other things that can cause an infant to be extremely irritable, such as a corneal abrasion or a hair tourniquet (when a strand of hair is wrapped tightly around the baby's finger or toe), and that's why you should check with a doctor if you feel your baby is acting very out of the ordinary, as it could potentially be something more serious.

Generally speaking, the crying that accompanies teething is slightly more than normal. It is not, however, uncontrollable screaming.

As far as what you can do to ease your baby through the teething process, Martin suggests starting with the typical things that comfort your baby and can help distract him from what's happening in his mouth. For instance, holding the baby in a certain way can help, as can an object (stuffed animal, doll) to which he is especially attached.

According to Martin, distraction can be very effective for some babies. It's like when nurses draw blood from little kids, they ask parents to rub the other arm to distract them. When babies lick the teething ring, they're just distracting themselves from the nerve fibers in their gums.

Parents can also help to ease their child's discomfort by gently massaging the gums with their fingertips. When it comes to teething rings, Martin suggests ones made of hard rubber and not the sort with liquid inside.

Many parents think that putting a teething ring in the refrigerator helps numb gums and/or reduce swelling. Neither is true, says Martin.

"I think if babies could talk to us they'd say that it's more of a strange sensation than it is of actual pain," he says of the teething process.

"If they were really in severe pain because of teething, we'd know it (we being pediatric ER doctors). When a baby is really in significant pain there are other physiological symptoms - their heart beats very fast, etc. But when you look at a baby that's uncomfortable because of teething, here's what we see - their faces look very uncomfortable, it looks like something is bothering their mouth, etc. It looks like they would be saying to you 'I don't like this feeling,' but it's not the searing pain some parents might imagine...if a baby is writhing around in pain, I don't think it's from teething and you should call your doctor."

Certain foods are perfect for teething babies. Martin recommends stale bagels and cookies, though not for children less than 6 months old, as they wont be ready for solid food.

Martin likes large, puffy bagels because it's unlikely a piece will break off and choke the baby. He also suggests soft, push-up popsicles-- essentially frozen Pedialite-- that he uses for babies who are dehydrated. Again, these are best for children 6 months or older.

Parents should start cleaning their children's teeth as they appear, though not with something as harsh as a toothbrush. Rather, Martin recommends a moist rag or even a clean finger, just as you would do for a gum massage.