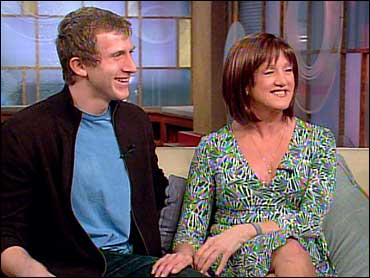 Karen Shelton has struggled through some terrible times. So when her son, Ari Picker, wrote, asking to honor her in The Early Show's Week of Wishes, his letter stood out right away.

"Dear Early Show: I'm writing to nominate my mother for consideration for Week of Wishes," he wrote. "My mom has always been a fighter and she has gone after the things she believes in. When I was eight, my mom was told that she had a fifty-fifty chance of surviving breast cancer. She was alone and without insurance."

Even before the devastating diagnosis, life had been difficult for Shelton. Two years before giving birth to Ari, she lost twin girls who were born prematurely. Later, she left an abusive relationship to raise her son on her own. Cancer came as a blow out of nowhere.

"I didn't know what cancer was. It was 16 years ago. It had never been in my family. I was teaching aerobics and eating broccoli every day," she said.

"I think she was really scared for me. And I think the thing that kept her holding on was me. She didn't want to leave me," said Ari.

The other thing that kept Shelton going was the comfort she found in creative expressions, as an artist.

"Art gives you a connection to something bigger," said Shelton, who has an art gallery in North Carolina called Sizl Gallery. "And when I'm really feeling like I'm connecting and I think all artists feel this way it's almost a spiritual experience."

Ari says his mother's art was literally what helped her to survive. "It's like a representation of how she feels she wants her life to be," he explained, "which is colorful, it's beautiful, the figures in the paintings are peaceful, and she loves doing it, too."

Shelton passed down her love of the arts to Ari, whose own creative talent is music. A student at Boston's Berkley School of Music, Ari says his mother is his inspiration. "Just being surrounded by my mom and all her artwork, it made me want to express myself in the same way she did."

But for someone who creates beauty all around her, it's been many years since Shelton has felt beautiful herself. "She had the chemotherapy and all her hair fell out," said Ari. "It just never grew back since, and she kind of has this low self-esteem about it."

So when Ari wrote to The Early Show, that was the focus of his request. "I would love to see my mom get a chance to be as beautiful as she wants to be. So, I wanted to ask you to give my mom a makeover," he wrote.

The Early Show's fashion expert David Evangelista, was happy to come to the rescue, with the help of Suze Yalof Schwartz, fashion editor-at-large at Glamour magazine.

The first stop in their New York makeover project was Macy's, which donated a $1,000 gift certificate to Shelton's new wardrobe. Next was the John Barrett Salon, where Evangelista's team of experts helped Shelton make the most of her looks.

In the end, Shelton felt like a new woman. "It's amazing, glamorous and beautiful," she said. While visiting The Early Show Thursday morning, the good news continued. Co-anchor Rene Syler surprised Shelton with the news that art supplier DickBlick.com is donating a $2,500 gift certificate. Shelton also will be getting a professional break that many artists dream of: The Animazing Gallery in New York's SoHO has agreed to hold a show of Shelton's work and to host a reception in her honor.

Hearing the good news, Shelton threw her arms around her son, saying, "He does magic for me."