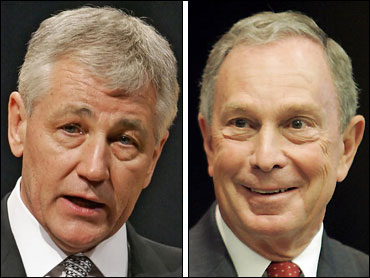 
The pre-primary season that ends Thursday began November 8, 2006, the day after the midterm elections. That 14-month season of cynicism served to diminish all candidates in both parties, insult the common sense of the electorate and hold the federal government hostage. As Ronald Reagan used to say about big government, big campaigns aren't the solution, they're the problem.

If our country were in its right mind, any office-seeker willing to submit to this un-American process would be, should be disqualified from high office.

The pre-primary process has not produced clear leaders or sharpened the nation's understanding of its challenges. It has shown that an African-American can run a credible pre-primary campaign in the Democratic Party, which isn't trivial. I can't find another virtue.

The sole remaining, albeit pathetic, justification of long campaigns is that they test the mettle and stamina of the candidates. Please. The stamina to shake every hand in New Hampshire? The mettle to repeatedly distort trivial aspects of other people's records and lives? Passing such tests is no honor.

The few regular readers of this column know where I am headed.

There might be choices beyond the two parties that have had a lock on political power since 1860. It would be a good thing for the country if a third party or independent candidate makes a run in 2008. The only potential for a great change in the direction and competence of the federal government will come if the two parties lose the White House for awhile.

For those reasons, I am much more interested in what happens on January 7 in Oklahoma than in Iowa or New Hampshire.

On that day, a bunch of political has-beens will gather to ponder ways to counter the hyper-partisanship of the times and the civic sclerosis caused by 23-month presidential campaigns. Those has-beens are some of the pragmatic, skilled legislators who kept the United States Senate functional and honorable in the 1980s and 1990s: Democrats David Boren, Sam Nunn and Charles Robb; Republicans John Danforth, William Cohen and Chuck Hagel.

The star power in Oklahoma next week will be provided by New York Mayor Michael Bloomberg, who could finance a national campaign and a 50-state ballot-access program from his household checking account. If anyone can make an independent run instantly credible, it's Bloomberg.

Third Way fantasists hope that the Okie Cabal will hook up with Unity '08, the group that intends to have an online primary to select a trans-partisan ticket for November. Count me in.

I am pulling for the dumb money.

Political parties are among the least respected institutions in America. Partisanship is a term of insult. Political celebrities generate their recognition in spite of their parties. The parties' power comes from habit. That is not an insurmountable foundation.

A third party ticket in '08 will avoid the cat-fighting of the pre-primaries and primaries. It can be the first modern independent race that has more funding than the parties. A Bloomberg-Nunn or Bloomberg-Hagel ticket could win with a plurality of the votes. The Third Way should also run candidates for the Senate and statehouses.

If this doesn't happen, the next four years will be only cosmetically different than the past 40 years, what historians will call the Post-Watergate Period of Partisan Failure.

I'm going with the dumb money.