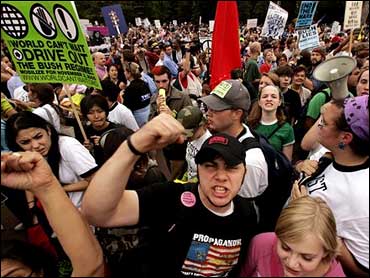 This column was written by Liza Featherstone.

If you stayed away from Saturday's antiwar demonstration in Washington, D.C., fearing extremist messages and pathetic numbers, you missed out.

Some people did just that, disturbed that United for Peace and Justice had agreed to co-sponsor its rally with Act Now to Stop War and Racism (ANSWER), a group that attracts criticism wherever it goes, for a lack of political nuance and a bullying attitude toward other organizations. Liberal groups like MoveOn.org did little to promote the event, despite the fact that with President Bush's approval ratings lower than ever, and more than half of Americans opposing the war, it presented a historic opportunity for a vigorous show of dissent.

Luckily, huge numbers of Americans — at least 100,000, maybe more — did seize that opportunity, traveling to the nation's capital from places as divergent as Louisville, Kentucky, and Orange County, California. Marchers included many more African-Americans than a typical D.C. antiwar march, as well as more people in their 30s and 40s with children. Despite the event's lack of support by any major Democratic Party leaders, clean-cut suburban liberals still proudly affiliated with the Kerry and Dean campaigns were also well represented.

Any fears about intemperate rhetoric were unfounded. Both in the marchers' own sentiments — scrawled on thousands of handmade signs — and in the speakers' exhortations from the podium, the protest was tighter and more consistent in its message than any such event in years.

There was no laundry list of grievances; rather, protesters expressed unified, clear and eloquent opposition to the war on the Iraqi people, and its toll on domestic priorities, especially as exemplified by the tragedy in the Gulf Coast. Speakers like Jesse Jackson, George Galloway and Cindy Sheehan were inspiring and succinct.

"Not one person should have died, and not one more person should die," Sheehan said. New Orleans was on everyone's lips, as a clear example of the Bush Administration's callous indifference toward people on its very own shores. The most-uttered slogan of the day was "Make Levees, Not War."

Marching toward the White House, students from Manhattan's Vanguard High School chanted, "Bush is a terrorist!" Of the money spent on the war, in contrast to the slow response to Hurricane Katrina in Louisiana, Irene Martes, a tenth grader, said, "It's discrimination." Mostly students of color, the Vanguard teens were also angry that military recruiters were coming to schools like theirs. Said Thays Barcelos, another tenth grader, "We're not going [to Iraq], and you can't make us."

After the march, protesters gathered for a free outdoor concert near the Washington Monument. Singer Steve Earle said from the stage, "I think what we're seeing is the beginning of a mainstream antiwar movement."

Liza Featherstone is a journalist based in New York City.

By Liza Featherstone
Reprinted with permission from The Nation