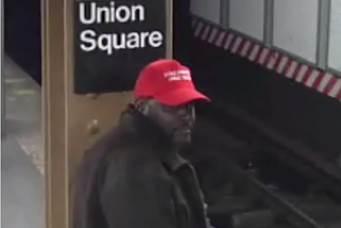 A man wearing a "Make America Great Again" hat is accused of pushing a man onto the New York City subway tracks, the NYPD said Saturday. A friend and Good Samaritan were able to pull the victim back onto the platform, CBS New York reports.

The NYPD said the suspect engaged in verbal dispute with the victim, a 24-year-old man, on a subway train. During the dispute, the individual made multiple derogatory statements regarding the victim's ethnicity, the NYPD said. The suspect allegedly followed the victim off the train at Manhattan's Union Square subway stop, and allegedly punched the victim in the head multiple times on the subway platform.

After being pulled back onto the tracks, the victim was taken to a local hospital and treated for a cut on his head.