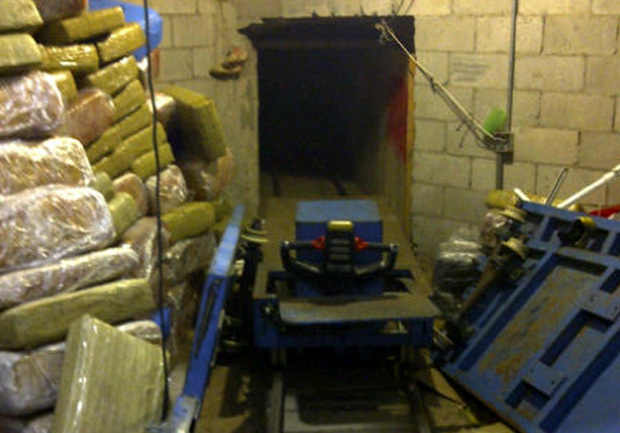 SAN DIEGO - U.S. authorities said they discovered a major cross-border tunnel Tuesday, the latest in a spate of secret passages found to smuggle drugs from Mexico.

"It is clearly the most sophisticated tunnel we have ever found," said Lauren Mack, a spokeswoman for U.S. Immigration and Customs Enforcement in San Diego. She did not provide details.

Mexican soldiers found the entrance on the south side of the border at a Tijuana warehouse after the U.S. opening was discovered. A photo released by U.S. authorities shows a hydraulic lift inside the Tijuana building.

Mexican soldiers guarded the two-story warehouse near the Tijuana airport as darkness fell. The white building had a broken window that was covered with paper and no exterior sign.

The Tijuana warehouse is on the same block as a federal police office and sits next to a packaging company and tortilla distributor.

The discovery comes less than two weeks after U.S. authorities found a 400-yard passage linking warehouses in San Diego and Tijuana, seizing 17 tons of marijuana on both sides of the border. It was equipped with lighting and ventilation.

As U.S. authorities heighten enforcement on land, tunnels have emerged as a major tack to smuggle marijuana. More than 70 have been found on the border since October 2008, surpassing the number of discoveries in the previous six years. Many are clustered around San Diego, California's Imperial Valley and Nogales, Ariz.

California is popular because its clay-like soil is easy to dig with shovels. In Nogales, smugglers tap into vast underground drainage canals. Authorities said they found a drug tunnel Tuesday in Nogales, running from a drain in Mexico to a rented house on the U.S. side.

San Diego's Otay Mesa area has the added draw that there are plenty of warehouses on both sides of the border to conceal trucks getting loaded with drugs. Its streets hum with semitrailers by day and fall silent on nights and weekends.

Raids last November on two tunnels linking San Diego and Tijuana netted a combined 52 tons of marijuana on both sides of the border, ranking among the largest pot busts in U.S. history. Those secret passages were lined with rail tracks, lighting and ventilation.

On Monday, a Mexican man was sentenced to nearly 16 years in prison for his role in last November's tunnels. Prosecutors described Daniel Navarro, 45, as a significant player in moving marijuana from the San Diego warehouse and sought a 30-year prison sentence.

U.S. District Judge Larry Burns said Navarro, a legal U.S. resident since 1999 who worked as a trucker in Southern California, was "up to his hips" in smuggling the large marijuana loads.

"This is just a gigantic amount of marijuana," Burns said.