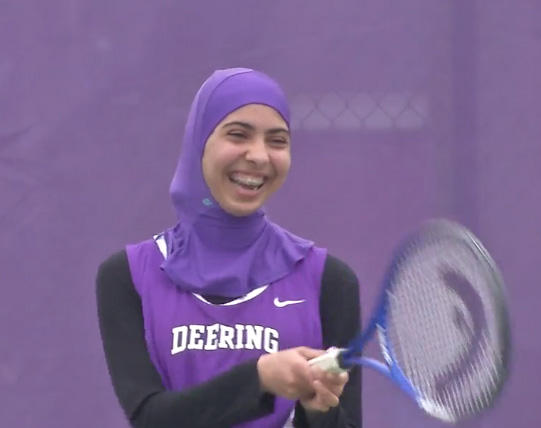 PORTLAND, Maine -- Muslim student athletes at one U.S. high school no longer have to be slowed down by worries that their headscarves might fall off.

Deering High School in Portland, Maine, is providing sport hijabs with the goal of making Muslim girls comfortable - and boosting their participation in sports. The lightweight scarves stay put and are less bulky than other hijabs, garments that cover the hair and are worn by many Muslim women to express their faith.

"We're more confident on the field," said junior lacrosse player Fadumo Adan. "This one doesn't fall off. No matter what I do, it won't fall off."

Tennis co-captains Liva Pierce and Anaise Manikunda raised more than $800 online to buy the sporty hijabs for their Muslim teammates after the school's athletic director learned of the product. They solicited private donations to avoid criticism for using taxpayer funds on religious apparel, and ended up with enough to outfit all teams, including lacrosse, soccer, volleyball, softball, field hockey and track.

The high school is believed to be the first in the United States to provide hijabs for Muslim athletes, as opposed to students providing their own headscarves, said Ibrahim Hooper, spokesman for the Council on American-Islamic Relations.

The move is part of a trend around the world of more Muslim women finding ways to play sports while wearing hijabs. Some Muslim countries, like Saudi Arabia, impose severe limitations on women engaging in sports, while cultural sensitivities and family opposition can also pose hurdles.

The International Basketball Federation and the international soccer organization FIFA lifted bans on head coverings in recent years, and Ibtihaj Muhammad became the first American to compete at the Olympics while wearing a hijab when she won a bronze medal in fencing at the 2016 Rio Games.

Muslim students at Deering said they were grateful for the support at a time when President Trump has pushed to ban travel from several Muslim countries.

Israa Enan, a senior who was born in Iraq, said she stayed off the school's tennis team because her parents had concerns about the uniform and lack of hijab.

"I wished I was one of these girls who wear the hijabs and play with it, but it's OK," Enan said. "I'm too late now." She said she's "happy for the other girls who have the opportunity now to wear the hijab and be more comfortable doing the things they like to do."

Maine - the nation's whitest state - is becoming more culturally and racially diverse with immigration. There are about 10,000 African newcomers, mostly from Somalia and Sudan in Maine's two largest cities, while others have come from the Middle East.

The tennis co-captains are not Muslim, but Pierce said there was a "duh!" moment when she discussed the idea with Melanie Craig, the school's athletic director.

"This makes so much sense. If there's something that we can do to make our teammates feel more comfortable, then why not just do it?" Pierce said.

Her Muslim teammates appreciated the effort.

"There are some people who actually care, respect and love others, and they are actually accepting of others, which makes me really happy," said sophomore tennis team member Tabarek Kadhim, who moved to Maine four years ago from Jordan.

"Our kids know that, when they come in through our doora, they're safe, thery're honored and we honor individuality. And this was one way we coudl do it," Craig told CBS Portland affiliate WGME-TV.

Nike announced last month that it'll begin marketing a sport hijab next year, bringing the product into the mainstream. But Craig didn't wait, finding a sport hijab manufactured by Asiya, a company that raised more than $39,000 in November to expand beyond selling locally in Minnesota.

Asiya is preparing to move manufacturing to New York to keep up with demand, said Fatimah Hussein, a Somalia native who coaches basketball and co-founded the business. The apparel company is named for Asiya bint Muzahim, a key figure in Islamic history known for standing up to injustice.

The market has potential: There are more than 610,000 Muslim women under 20 across the United States, according to the Pew Research Center.

"We're hopeful that this does encourage more Muslim female athletes to participate," said Craig. "I do believe it has held some of them back. It takes courage for them to stand out here and honor who they are and their diversity."