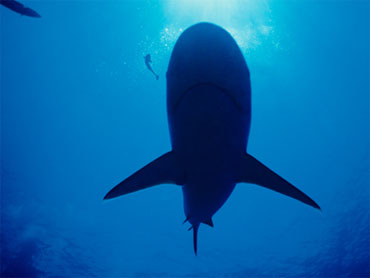 A scuba diver who came face-to-teeth with a shark used a camera to fend off the animal when it came at him with its teeth bared - and he has the frightening video to prove it.

(Scroll down for video)

Scott MacNichol, 30, was shaken up but uninjured after a porbeagle shark apparently mistook his camera equipment for food Saturday while diving near Eastport, off the eastern tip of Maine. He estimated the shark was 8 feet long and weighed about 300 pounds.

MacNichol saw the shark swimming above him while he was filming the ocean floor under empty salmon pens as part of an environmental assessment for Cooke Aquaculture Inc. The animal then came at him, jabbing at the camera with its snout. In the video, its sharp teeth fill the frame before it swims off.

"He took a couple of bites at the camera. When he did that I was pretty much petrified," MacNichol said Wednesday. "If you watch the video, you can hear me screaming underwater."

Porbeagles are coldwater sharks that have a similar body shape and tail to mako and great white sharks. Their diet is primarily herring, mackerel and other bony fish.

The shark was probably drawn to MacNichol from the camera's light, batteries and silver casing, said Chris Heinig, owner of MER Assessment Corp., who was on the dive boat on the surface when the shark lunged at MacNichol.

"I think it came up and bumped the camera to see what it was," Heinig said. "But I honestly don't think the shark attacked Scott."

While hundreds of shark attacks have occurred in Florida, California and other warm-water states, they are rare in New England. The last fatal shark attack in New England was in 1936, when a boy died after being attacked in Massachusetts, according to the International Shark Attack File at the University of Florida's Museum of Natural History, which tracks shark attacks.

MacNichol, who has been diving commercially since 1998, took a day off from diving after the attack but doesn't plan to give it up for good.

"People get in car accidents every day and that doesn't keep them from driving," he said.