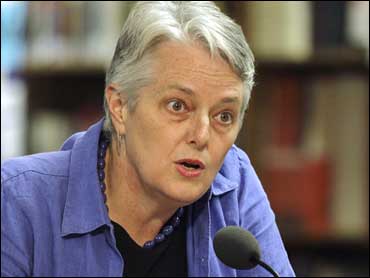 News reports of contraceptives provided to girls as young as 11 at King Middle School led to an uproar. Republicans launched an effort to recall members of the school board. And District Attorney Stephanie Anderson warned health professionals that they were illegally failing to report underage sex.

At the center of the debate is the coordinator of Portland school nurses, who happens to be the wife of Maine Attorney General Steven Rowe.

Amanda Rowe, an outspoken supporter for children's health and sex education, said she isn't paying attention to what the national news media or talk show hosts have to say about the Portland School Committee's decision.

The decision to make available birth control prescriptions to children whose parents allow them to visit the school clinic was the right one, she said.

"I am committed to this, and I will see it through," Rowe told the Portland Press Herald.

Rowe, 53, said she was prepared for controversy when an advisory board that reviews sex education programming in the Portland schools decided that birth control prescriptions should be made available at the middle school health clinic.

But she did not expect a national debate.

Nonetheless, she said the national controversy is irrelevant. "We are trying to do things for our own little community," she said.

Rowe attended the University of Maryland's Walter Reed Institute of Nursing on an Army scholarship and spent the years after graduation working as a pediatric nurse in the Army. She came to embrace the military's medicine. "It was a universal system," she said.

After returning to Maine, Rowe taught pediatric nursing at Westbrook College and earned a master's in education from the University of Southern Maine. She and her husband have four children. Their youngest is a college senior.

Rowe is a breast cancer survivor, and she said that helped to shape her beliefs. "We are on this Earth for a very short time and have only one chance to act on our convictions," said Rowe, whose health is fine today.

People who know her say she doesn't back down from her convictions.

Longtime friend Rosemarie DeAngelis, a South Portland city councilor, said Rowe earned her lifelong allegiance in 2002 when Rowe stood up for her in a dispute with the Maine Education Association, the state's largest teachers union.

Rowe and others crashed a closed-door suspension meeting between DeAngelis, a treasurer for the South Portland Teacher's Association, and state union officials in a dispute over DeAngelis' accounting of her chapter's dues money.

Rowe and two others were arrested for criminal trespass. The charges were later thrown out.

"I don't know many people who would go in and get themselves arrested on your behalf, and that is what Amanda did for me," DeAngelis said.