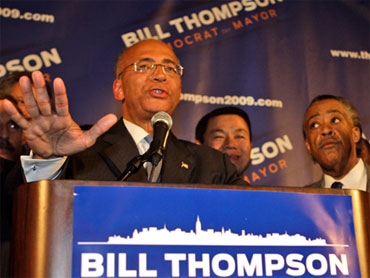 When it comes to comments on current events, comedian Bill Maher has perfected irreverent indignation to high comic art.

And now he has brought that bemused outrage to Broadway, where his entertaining one-man show, "Bill Maher: Victory Begins at Home," opened Monday at the Virginia Theatre.

Nothing seems to astonish him, especially when it comes to politics. So while he gets angry, he knows things could get worse, which may be one of the keys to his success. Plus, Maher is an equal-opportunity satirist. Democrats as well as Republicans, liberals as well as conservatives, all come in for some serious and not-so serious scrutiny.

Yet Maher seems to have special affection for skewering the current Bush administration, while at the same time admiring its ability to control the terms of daily political debate. For one thing, he thinks the Bushies are masters of what Maher calls the three branches of government: the photo op, the marketing and the focus group. And the Democrats are having a terrible time playing catch-up.

"The French stood up to the Bush administration which is more than I can say for the Democrats," the comedian declares.

Maher's show is done simply with minimal production values, although political posters, especially tailored to his material, are used as a backdrop. "Loose lips might save ships," says one. "It's not a new world. We just joined it," proclaims another in front of what looks like a Sept. 11 memorial service.

"I was the first guy to be Dixie-Chicked," says the stand-up comedian, referring to the country singers who were lambasted for criticizing Bush before the start of the U.S.-led invasion of Iraq. Maher's late-night television show, "Politically Incorrect," got bounced from ABC last June, and Maher has maintained the show was canceled because of remarks he made following the World Trade Center attacks in which he had characterized previous U.S. military actions as cowardly. ABC said the program was taken off the air because of declining ratings. He now has "Real Time With Bill Maher" on HBO.

Maher's current evening would fit even better in a comedy club than in a large Broadway house where television monitors have been set up overhead so the audience can see those posters, which are projected far backstage, even more clearly.

Casually dressed, he stands on stage and occasionally takes sips of bottled water and, at one critics' preview, he took a sip of what he said was Jack Daniels and Coke.

"We don't need to watch what we say," Maher says, at one point. He certainly doesn't, and, as a result, the laughs roll on.