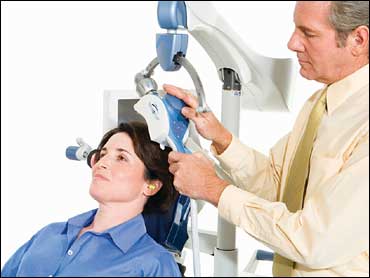 The U.S. government has approved the first noninvasive brain stimulator to treat depression - a device that beams magnetic pulses through the skull.

If it sounds like science-fiction, well, those woodpecker-like pulses trigger small electrical charges that spark brain cells to fire. Yet it doesn't cause the risks of surgically implanted electrodes or the treatment of last resort, shock therapy.

Called transcranial magnetic stimulation or TMS, this gentler approach is not for everyone. The Food and Drug Administration approved Neuronetics Inc.'s NeuroStar therapy specifically for patients who had no relief from their first antidepressant, offering them a different option than trying pill after pill.

"We're opening up a whole new area of medicine," says Dr. Mark George of the Medical University of South Carolina in Charleston, who helped pioneer use of TMS in depression. "There's a whole field now that's moving forward of noninvasive electrical stimulation of the brain."

While there's a big need for innovative approaches - at least one in five depression patients is treatment-resistant - the question is just how much benefit TMS offers.

The FDA cleared the prescription-only NeuroStar based on data that found patients did modestly better when treated with TMS than when they unknowingly received a sham treatment that mimicked the magnet. It was a study fraught with statistical questions that concerned the agency's own scientific advisers.

For a more clear answer, the National Institutes of Health has an independent study under way now that tracks 260 patients and may have initial results as early as next year.

Quantifying the benefit is key, considering the price tag. TMS is expected to cost $6,000 to $10,000, depending on how many treatments a patient needs, says Dr. Philip Janicak of Rush University Medical Center in Chicago, who helped lead the NeuroStar study. That's far more expensive than medication, yet thousands of dollars cheaper than invasive depression devices.

Neuroscientists have been using TMS for years as a research tool in brain studies. Zap a powerful magnet over a certain spot on the head - where motion is controlled - and someone's arm can suddenly, involuntarily, lash out. Beyond the "wow" factor, magnetized pulses were triggering brain activity.

The question was how to harness that activity in a way that might improve disease. TMS also is being studied in stroke rehabilitation and other brain disorders.

"Nobody thought this would work; it was a crazy idea. I had to do it at 6 in the morning before the real scientists came in," South Carolina's George laughs as he recalls work he began in 1993.

But, "the brain is an electrical organ," George adds, explaining the rationale. "Electricity is the currency of the brain. It's how the brain does what it does."

For depression, psychiatrists aim the magnet at the left front of the head, the prefrontal cortex. Since everyone's brain is different, they first zap the top of the head to find a patient's motor-control region, and then carefully move 5 centimeters forward. Then, the NeuroStar beams about 3,000 pulses a minute during a 40-minute treatment, done about five times a week for up to six weeks.

TMS did prove to be very safe: Patients in the NeuroStar study suffered no seizures or memory problems like shock therapy can cause, or other reactions throughout the body. The chief complaint from the sessions was headaches.

The FDA cleared the device after focusing just on a subset of the patients initially enrolled - 164 who had failed one antidepressant during their current bout of depression, not those who were more severely treatment-resistant.

What's a modest benefit? About 24 percent who got TMS scored significantly better on standard depression measures after six weeks, compared with 12 percent who got the sham, says Janicak. That's about as well as patients respond to a single antidepressant, he says.

"One day it was like a light switch went off," says Steve Newman, 60, of Washington, D.C., who enrolled in the NeuroStar study at the University of Pennsylvania in 2005.

Newman had suffered repeated bouts of depression since he was a teenager, and drug after drug barely blunted it. He was considering shock therapy when he heard about TMS.

After two weeks of treatment, Newman was wondering if he was getting the sham - when suddenly, he started feeling lots better, and doctors spotted a corresponding major improvement in his depression measurements.

"I was awake. I was there," says Newman who said he still gets what he calls a "maintenance dose" of TMS about once a month.