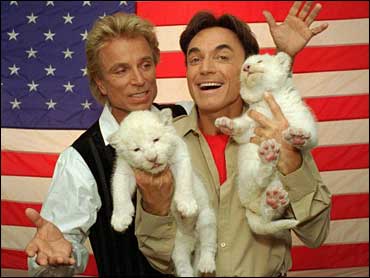 Roy Horn of the flashy magic act Siegfried and Roy says the tiger that bit him and dragged him across the stage did not attack him.

People magazine's Michael Fleeman, one of the few journalists to interview Roy, tells The Early Showco-anchor Julie Chen: "It's unsettling to listen to him. He said the tiger saved him. Roy has this theory that he was suffering a stroke, some kind of an attack on stage right before, that he tumbled and this spooked or somehow confused the tiger and the tiger just dragged him off the stage, according to script. They went right off stage the same way they did night after night."

Horn's doctors can't comment on the theory because "after he was bitten, he did have a stroke, a massive stroke, and it caused so much damage to his brain and head that they can't tell what happened now," says Fleeman.

Horn's life is now built around his recovery. His speech is slurred, his left arm is almost useless and he can't use his left leg. He spends many painful hours trying to regain use of his limbs and voice. He cannot walk on his own power.

Roy's prognosis is murky. "Typically, he will only progress a little bit more than what he is now. It will require some advances in technology and science - similar to Christopher Reeve. He's waiting for the next breakthrough to help him, and I think that is what Roy is waiting for, too. At the current state of technology, he's probably advance another 10 to 20 percent," says Fleeman.

Roy spends some time gardening, visiting his animals and working in his office.

The tiger that attacked him is living with his siblings in the Mirage Hotel, off limits to the public. Roy visits him occasionally.

Fleeman's article appears in the upcoming issue of People.