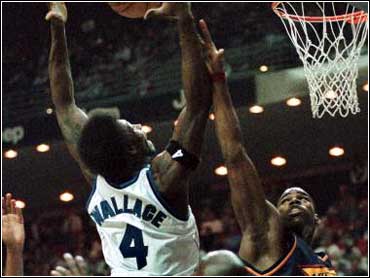 Doc Rivers worried that the Orlando Magic might be ripe for a letdown after beating two of the best teams in the Eastern Conference.

But there was no cause for alarm Monday night with the Golden State Warriors playing more like the team that lost 12 straight in December and January than the club that recently won four in a row.

"After beating New York and Indiana back to back, this game scared me a little bit," Rivers said after the Magic never trailed in a 120-100 rout of the team with the third-worst record in the NBA.

" I think the last three or four games we've really hit a nice stretch defensively, which has scored a lot of points for us. It's all about defense, and tonight we never let up."

Second-year center John Amaechi scored a career-high 25 points, all but two in the first half. His backup, Michael Doleac, had a season-high 23 points, while Ron Mercer scored 18 in his second game since joining the Magic in a trade last week.

"We were very concerned about this team because we just played two tough teams," Amaechi said. "We were smoked by these guys last time (113-100 at Golden State on Jan. 17), so we knew we had to play."

Antawn Jamison led Golden State with 22 points. Vonteego Cummings had 19 points, all in the second half, and Jason Caffey finished with 18.

But after winning four in a row, the Warriors have returned their old ways in losses to New Jersey and Orlando the past two days.

They never led Monday night, and coach Garry St. Jean was ejected when he drew two technicals for comments to officials with 2:18 left in the econd quarter.

"I think you have to look at what the Magic did to us instead of what we didn't do," said Warriors assistant coach Rod Higgins, who filled in for St. Jean after the ejection.

"I thought they came out very energetic ... You don't want to make excuses. I think the Magic deserved the lead, but I think there were some things we could've done better, especially transition defense."

Amaechi, averaging 8.6 but coming off a 19-point outing in Saturday night's win over Indiana, made 7 of 10 shots from the field and was 9-for-10 from the foul line for 23 first-half points.

There was no dropoff when Doleac, a part-time starter averaging just under eight points per game, entered. He made 6 of 7 shots and had 13 points at the half.

Orlando blew a 17-point lead before pulling away from the Pacers in the fourth quarter of Saturday night's game. The Warriors, however, never made a serious run after falling behind 27-9 with just over three minutes left in the first quarter.

"That's what Doc focused on at halftime," Doleac said. "That we've got to take care of business, and just because we have the lead, don't let up and let them back in the game."