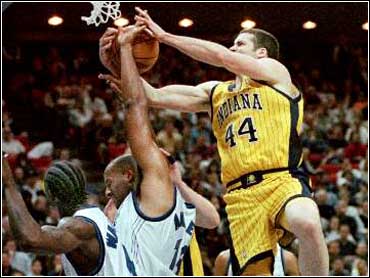 The way Larry Bird saw it, Chucky Atkins was only part of the reason the Orlando Magic beat the Indiana Pacers on Saturday night.

"They played with a lot of energy and when you do that, you're going to win a lot of ball games," Bird said after Atkins scored 15 of his 17 points in the fourth quarter to carry the sub-.500 Magic to a 107-102 victory over the team with the best record in the Eastern Conference.

"We didn't match their statistics in the beginning, and we didn't match them in the fourth quarter. Their ability to get up and pressure people on the defensive end scores a lot of baskets for them."

John Amaechi had 19 points and Pat Garrity added 18 for the Magic, but it was Atkins who came through down the stretch.

The backup point guard scored seven of Orlando's last eight points, including a driving one-hand runner that put his team up 103-97 with 49 seconds to go.

"This just shows that we're growing as a team," Atkins said.

"We haven't been together as much as some of these other teams have and we've struggled, losing some games in the fourth quarter. Lately, we've been able to hold teams off."

Indiana, which has the best record in the East at 30-16, has won 17 straight at home, including a 10-point victory over Sacramento on Friday night.

But the Pacers haven't won on the road since coming from behind to beat Orlando 96-89 on Jan. 15, and they're just 2-9 away from home since the start of last month.

It was another uphill battle this time. Orlando built an early 17-point, fell behind in the third quarter and regained control early in the fourth period.

Garrity made three of his season-high four 3-pointers in the fourth quarter when he scored 13 to help Atkins carry the offense.

"We fought back and felt the game was in our control," Indiana's Mark Jackson said. "They made big plays and knocked down big shots. Those are shots that hit you like daggers."

Jalen Rose led Indiana with 25 points, however the Pacers only got 13 from Reggie Miller on 3-for-8 shooting to lose for the fifth straight time on the road.

After stopping high-scoring Sacramento the night before by holding the Kings to 39 percent shooting, the Pacers allowed the Magic to shoot 46 percent and committed 23 turnovers that led to 24 points.

"We weren't tired from last night," guard Travis Best said. "You just have to give Orlando credit."

Ron Mercer, obtained along with Chauncey Billups and Johnny Taylor in a trade that sent Chris Gatling and Tariq Abdul-Wahad from Orlando to Denver earlier in the week, was 4-of-12 from the field and scored eight points in his first game for the Magic.

Indiana trailed 25-8 with three minutes left in the opening quarter and wiped out the deficit over the next 12 minutes.

Rose scored 10 in the first four minutes of the second quarter and Austin Croshere tied it on two occasions before Orlando took a 53-50 halftime lead.

The Pacers led 73-69 going into the fourth quarter, but couldn't stay in front. Orlando began the last period with a 22-9 run to go up 91-82 with just under seven minutes left.

The closest Indiana got the rest of the way was four points twice, the last time at 101-97 with about a minute to go.