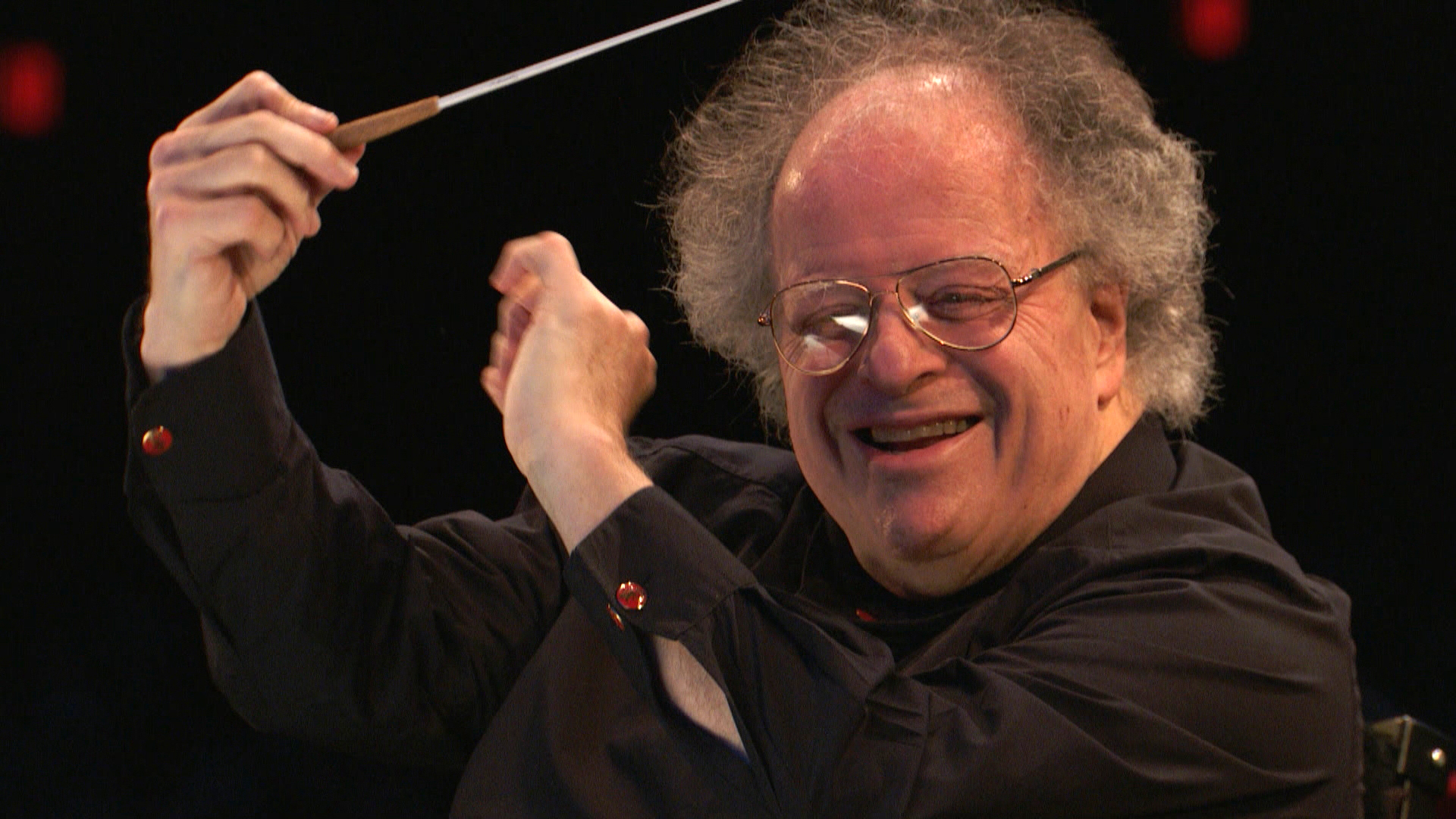 The following script is from "The Maestro" which aired on March 8, 2015. Bob Simon is the correspondent. Ruth Streeter, producer. Matthew Danowski, editor.

James Levine is America's greatest living conductor, in the judgment of many music lovers...including our late colleague Bob Simon, who could often be found attending Levine-led performances at the Metropolitan Opera.

Before we lost him in a tragic car crash last month, Bob completed a story on the 71-year-old maestro who has directed and defined New York's incomparable Met for almost half a century; has guided and inspired three generations of the world's best singers and become America's most influential maestro since Leonard Bernstein. Under his baton, the Met became the house of Levine. Four years ago, a terrible accident left him partially paralyzed. As Bob Simon reported, only believers in miracles thought Levine could return to the podium, but after a two-year absence...he did.

When he made his comeback, Levine, now in a wheelchair, before even lifting his baton, got a standing ovation. That usually happens at the end of an opera, not at the beginning.

He would conduct Mozart's Così fan tutte, one of his favorites. If you could see music as well as hear it, you would see it in the face of James Levine.

James Levine: I was just grateful beyond words. It was clear that I could still do this work and that the orchestra and the company and the audience wanted me to do it.

And, oh, it felt like I had--a chance to get my life back.

Bob Simon: Are you aware of how sad, even desperate, many of the musicians and singers were when you weren't around?

James Levine: Yes, Bob, I'm very aware of it. They called me, they wrote me letters, and the messages were always, "We need you. Get well. Come back as quick as you can." It was a fantastic, motivating thing for me. I didn't conduct for really two seasons. And it felt like forever.

It also seemed like forever not only to the Met but to the entire world of opera. He's been conducting here since he was 27, but has been making music since he was a toddler. He grew up in Cincinnati, the son of a former big band leader and a Broadway actress. He wasn't just your garden variety prodigy and everyone seemed to know it. He did too.

Bob Simon: Was there ever a single moment when you weren't sure you wanted to devote your life to music?

James Levine: Never. I knew it was one of my earliest awarenesses, that I loved music, and it was what I was happiest doing, always.

In 1976, Levine became music director of the Met where he's conducted more than 2,500 performances. He's also conducted every major orchestra in America and Europe...and coached the greatest singers of our time: Leontyne Price and Marilyn Horne, Renee Fleming. And he participated in what was probably the most popular classical music event in history, he brought opera to the masses with the three tenors: Domingo, Carreras, Pavarotti.

Peter Gelb: He is one of the greatest conductors in the history of conducting.

Peter Gelb is the general manager of the Metropolitan Opera.

Bob Simon: Can you describe what distinguishes Levine from other conductors?

Peter Gelb: He taught the Metropolitan Opera orchestra to listen to singers. He made them into a truly great opera orchestra and his ability to get the best out of the performers is another hallmark. He's a conductor for the ages, in that regard.

Levine's career seemed destined to accompany him into old age brilliantly and seamlessly. But then starting in 2000, his body began to fail him, a host of ailments. He cancelled performances.

James Levine: There were times when I really couldn't work, or I had to work in so much pain, it was a big distraction.

Then in 2011 he took what turned out to be a catastrophic fall.

James Levine: I fell down a flight of steps onto the grass. And gradually, over the rest of that day and the following day, the feeling went out of my legs. And I couldn't move 'em.

He had fractured his spine, took an indefinite leave of absence.

Bob Simon: Was there a moment when you realized, "I think I'll be able to conduct again?"

James Levine: No, but there was a moment that I remember after what seemed like an endless number of days, I kept saying to my leg, "go on, move." And one day I said, "go on, move," and it did.

James Levine: And I said, "you really do that, didn't you? Can you do that again?" and it did it again.

That minuscule movement brought hope back to the Met and to Levine's closest buddy Placido Domingo. They've been making music together for decades.

Bob Simon: When he was at the point that he couldn't move his legs did you ever doubt that he'd be able to come back?

But how would he come back? It took a lot of engineering. The Met designed a portable podium dubbed the "maestro lift" that works like an elevator. It goes up and down and allows him to turn.

[James Levine: Good morning everybody. I drove here in my chair which is why I'm a few minutes late. In any case, let's do Act Two please..... One two one two... there we are.]

Bob Simon: You have been number one for over 40 years. What do you do that number 10 does not do?

James Levine: No, I don't. My job is to keep making it better.

James Levine: Which gets subtler and subtler, the better you get.

We went with Levine to rehearsals of Verdi's comedy Falstaff to find out how he makes it better. he opera is about a shameless rogue and the women who are determined to trap him.

Levine's credo... when you think you have finished rehearsing, rehearse again.

Levine has conducted Falstaff 50 five times and says he's still trying to get it right.

[James Levine: What you say. Wow.]

He has been working with the great American mezzo soprano Stephanie Blythe since she was a student of his 20 years ago.

Stephanie Blythe: The man understands singers. He understands the psychology of singing. Which is not easy.

Bob Simon: What is the psychology of singing?

Stephanie Blythe: Well, everyone's different. You know, we're like a load of snowflakes up there. When you're up on the stage, there's an enormous amount of fear that goes along with that. You can't take a risk unless you're brave. And you can't be brave if you're looking down in the pit and you see the top of someone's head.

Bob Simon: And he gives you confidence?

Stephanie Blythe: He gives you an enormous confidence

Singers call him the best coach in opera because he always tells them how good they are before pointing out how they can and must do better.

[James Levine, piano rehearsal: That's it...wait a minute, wait a minute. That was a nice one....

James Levine: In other words, then the voice goes together with your smile which is wonderful and your cheek bones and your eyes which are beautiful. ]

James Levine: I try to make a rehearsal room a very safe environment for a singer so that we can make improvements.

Bob Simon: When's the last time you screamed at a singer?

James Levine: I don't scream at people. You like it if people scream at you?

Bob Simon: No, not at all. But people do.

Instead, they just sing their hearts out. When the ladies leave, Levine does too. To that other New York landmark Central Park, the great outdoors. And here too, the tempo is allegro.

Bob Simon: That really goes at a fair clip.

Bob Simon: (laugh) I bet it can outpace me.

James Levine: The park's a miracle. It's, in a way, like a mini-vacation, just to come in there for a couple of hours.

Bob Simon: What do you plan for your retirement?

He never plans to. Maestros rarely do. But he's focused on his legacy, shaping and molding the next generation of singers. Thirty-five years ago he created the Met's Lindemann Young Artist program. Even when he couldn't conduct, he kept on working with his students.

Today, he's coaching Mary-Jane Lee from Canada. She is taking on one of the most heartbreaking arias in all opera. The doomed Desdemona in Verdi's Otello...

Levine has conducted Otello more than any other opera and with the greatest divas of the century... but watch him with this young student, he seems as moved as he's ever been.

[James Levine, rehearsal: You did a lot of great work on that piece, didn't you?

James Levine: You're guaranteed, from the minute the music starts, until it stops, nothing is in there except that.

The making of the Beatles' "Let It Be"