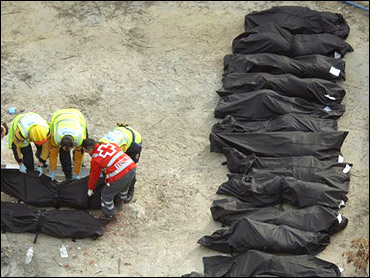 Ten terrorist bombs tore through trains and stations along a commuter line at the height of the morning rush hour Thursday, killing more than 190 people and wounding 1,200 in the country's worst terrorist attack.

The Spanish government initially blamed the Basque separatist group ETA, which came three days before Spain's general elections, but then seemed to back away after police found detonators and an Arabic-language audio tape of Quranic verses in a van near where the bombed trains originated.

The London-based Arabic newspaper Al-Quds al-Arabi said Thursday evening it had received a claim of responsibility in the name of al Qaeda.

A senior official in Prime Minister Jose Maria Aznar's office said the government was studying the reported claim but still thought ETA was more likely behind the attacks.

"It is still not proven that it is an authentic claim of responsibility," the official said on condition of anonymity. "We think there are more possibilities that it is ETA than any other organization."

U.S. authorities are reviewing the letter, but caution it is too early to say if the threat of more violence is credible, reports CBS News Correspondent Bob Orr.

The group making the claim, Abu Hafs al Masri Brigades, is affiliated with al Qaeda and has carried out bombings before. But U.S. officials caution the group is "notoriously unreliable" and does not necessarily speak for Osama bin Laden's organization. For example, Abu Hafs took credit for last summer's Northeast blackout, Orr reports.

The blasts came three days before Spain's general election and were among the deadliest anywhere in the world since the Sept. 11 terrorist attacks in the United States. They were Europe's worst since the 1988 bombing of a Pan Am jetliner over Lockerbie, Scotland, which killed 270 people.

After an emergency Cabinet meeting, a somber Aznar vowed to hunt down the attackers.

In Madrid, commuters panicked, trampling one another, abandoning their shoes and bags, as the bombs turned commuter trains into twisted wrecks and strewed platforms with bodies. Cellphones rang unanswered on dead bodies, as frantic relatives tried to contact them. In all, four trains were bombed.

Interior Minister Angel Acebes said 192 people were killed and more than 1,240 were injured.

If confirmed as ETA's, the attack could signal a radical and lethal change of strategy for the group that has largely targeted police and politicians in its decades-long fight for a separate Basque homeland.

After police found the van with seven detonators and the Arabic-language tape, Acebes said: "I have just given instructions to the security forces not to rule out any line of investigation."

The van was found in the town of Alcala de Henares, 25 kilometers (15 miles) northeast of Madrid and stolen in the capital on February 28.

The claim of responsibility, which was e-mailed to the Al-Quds al-Arabi newspaper in London, was signed by the shadowy Brigade of Abu Hafs al-Masri. The claim said the brigade's "death squad" had penetrated "one of the pillars of the crusade alliance, Spain."

"This is part of settling old accounts with Spain, the crusader, and America's ally in its war against Islam," the statement said, which was faxed to The Associated Press in Cairo by the paper.

"Aznar, where is America? Who will protect you, Britain, Japan, Italy and others from us?" the statement said.

Aznar was a staunch supporter of U.S.-led war that ousted Saddam Hussein and has sent 1,300 troops to Iraq.

CBS News Analyst and Journalist Jere van Dyk says he believes al Qaida is to blame, and that Spain is not a surprising target.

The 10 backpack bombs exploded in a 15-minute span on trains along 15 kilometers (9 miles) of commuter line from Santa Eugenia to the Atocha terminal, a bustling hub for subway, commuter and long-distance trains just south of Madrid's famed Prado Museum.

In another break with past ETA tactics, the blasts were multiple and carefully coordinated. The group tends to go after one target at a time.

At the Santa Eugenia station, "there was one carriage totally blown apart. People were scattered all over the platforms. I saw legs and arms. I won't forget this ever. I've seen horror," said Enrique Sanchez, an ambulance worker.

Sympathy poured in from capitals worldwide. The United States, Britain and Russia said the attacks demonstrated the need for toughened resolve against terrorists.

"I appreciate so very much the Spanish government's fight against terror, their resolute stand against terrorist organizations like the ETA, and the United States stands with them," said U.S. President George W. Bush, who spoke by telephone with Aznar.

"Nothing ever justifies barbarity. Democracies must be — and will be — united in combatting this without weakness," Chirac said.

Thursday's attack marked a horrific end to Aznar's eight-year reign as prime minister. Aznar, who himself survived a Madrid car-bomb attack in 1995, will step down when a new government is formed following Sunday's elections.

Campaigning was called off and three days of mourning were declared.

Revulsion over the attack could benefit Aznar's ruling conservative Popular Party at the polls because of its hardline stance against ETA. The government called nationwide anti-ETA rallies for Friday. Spontaneous rallies broke out Thursday night in Madrid, Barcelona and other cities.

Both the Popular Party and the opposition Socialists ruled out talks with ETA during the campaign.

ETA has claimed responsibility for more than 800 deaths since 1968, but most came in assassinations or small-scale attacks. ETA's deadliest attack was a supermarket blast in Barcelona in 1987 that killed 21.

Police believe that ETA — Basque Homeland and Freedom, or Euskadi ta Askatasuna in the Basque language — number perhaps only several dozen hard-core militants who are supported by a wider group of Basque nationalists.

Basques are deeply conscious of their own ancient culture and distinct language, and many resent Spanish control. There is strong support for an independent homeland or autonomy, though most Basques abhor ETA's violence, and some oppose separating from Spain.

The Interior Ministry said tests showed the explosives used in the attacks were a kind of dynamite normally used by ETA.

Corpses were entangled in the shredded metal wreckage of train cars and body parts littered platforms. Horrified rescue workers recovered remains of the old and very young. Hospitals appealed for blood. Buses were pressed into service as ambulances.

"People dropped everything, bags and shoes and ran, many trampling on others," said Anibal Altamirano, a 26-year-old who had been about to board a train at Atocha. "People didn't know which way to go. Some even went into the train tunnels without thinking other trains could be coming."

The bombers used titadine, a kind of compressed dynamite also found in a bomb-laden van intercepted last month as it headed for Madrid, a source at Aznar's office said, speaking on condition of anonymity. Officials blamed ETA then, too.

The government had recently expressed cautious optimism that ETA was near defeat after mass arrests of alleged members, seizures of weapons and explosives, increased cooperation from neighboring France and the banning of ETA's purported political front. Just three people were killed in ETA attacks last year, compared to 15 in 2001 and 23 in 2000.

Spain held peace talks with ETA in the late 1980s and again in 1998 after the group declared a cease-fire that lasted 14 months. But ETA resumed attacks, and Aznar has insisted on crushing it with police measures.

"No negotiation is possible or desirable with these assassins who so many times have sown death all around Spain," Aznar said.

A top Basque politician, Arnold Otegi, blamed the attacks on "Arab resistance" noting Spain's support for the Iraq war despite domestic opposition. Many al Qaeda-linked terrorists also were captured in Spain or were believed to have operated from there.

The government said ETA had attempted a similar attack on Christmas Eve, placing bombs on two trains bound for a Madrid station that was not hit Thursday.

"ETA had been looking for a massacre," Acebes said. "Unfortunately, today it achieved its goal."