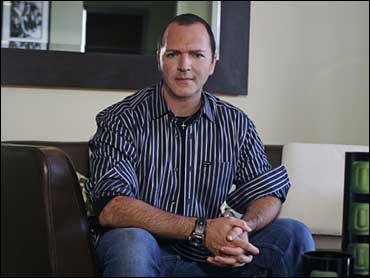 Christopher Ciccone, once a fixture at his sister's side but now estranged, recently released his book, "Life With My Sister Madonna" in which he breaks his silence about their shared past and reveals what Madonna was really like behind the curtain.

"I got a chance to step back, see the whole story of the adventure that I had been on for 20 years with my sister, for 47 years as a family and saw a great story - that's what inspired the book," Ciccone told CBSNews.com. "Some may consider it betrayal of some kind, I consider it my memoirs. I can't tell my story without telling hers. Our lives are completely intertwined."

And when it comes to Madonna, the story always seems to be taking new twists and turns.

This week she kicked off her "Sticky & Sweet" tour in the U.K., splashing images of U.S. presidential hopefuls John McCain and Barack Obama on big screens- comparing McCain to Adolf Hitler and Zimbabwean dictator Robert Mugabe and Obama to John Lennon and Mahatma Gandhi.

"I had no contact with her about the latest tour, but have heard a description of it ... sounds way too political for my taste," her estranged brother said. "I long for the old joyful fun days of the 'Girlie Show' when the show was entertaining and uplifting and you felt great when you walked out, not beaten over the head with a blunt instrument."

There were also rumors that surfaced this week of another possible Malawi adoption, which were spilled by her husband, British film director Guy Ritchie.

And the Queen of Pop also held the spotlight, where she thrives, for weeks prior to that.

She rang in her 50th birthday dancing at a club, her face appeared on the cover of New York magazine suggesting plastic surgery, she denied a love affair with the New York Yankees Alex Rodriguez and she defended her marriage to Ritchie. All as her younger brother released his tell-all book.

Like his pop icon sister, Ciccone is reinventing himself.

Ciccone, 47, who spent most of his life in Madonna's shadow - either by choice or obligation as her back-up dancer, personal assistant, dresser, decorator, art director and tour director - is now experiencing a long-awaited epiphany. He is free from the persuasive grip that his sister once had over him, but doesn't have any regrets.

"In my lifetime, I have lived what one person couldn't live in four," Ciccone said.

From their conservative upbringing, to dancing back-up at clubs around Manhattan in the early '80s, toweling her off on tour, being entrenched in her complicated relationships, decorating her mansions or trying to protect her from the paparazzi, Ciccone was consumed by his sister's world.

In the book, "you get to look behind the curtain and sort of see what its like to live it," Ciccone said. "It's also a story of a brother and a sister, a father and a son and a family caught up in all of that fame and the world that exists around it. It's a strange and sometimes horrible thing, but it's a great story."

Having lost their mother to cancer at a young age, the two found solace and acceptance in each other while growing up in Michigan; Madonna, the daddy' s little girl attention-seeker turned rebellious teen and Christopher, a timid kid turned curious teen, who yearned for understanding of his homosexuality.

Wanting to see the world, Madonna headed to the University of Michigan to study dance and then to New York. Ciccone later followed, and the two ultimately filled a void for each other.

Although Ciccone said he cringed when Madonna appeared on MTV singing "Like A Virgin" while throwing herself all over the stage in a wedding dress and crucifixes at Radio City Music Hall, he knew that she was headed for superstardom.

Since Ciccone was so close to his sister when fame came, it didn't come as a big surprise.

"The opening night at Wembley Stadium for the 'Girlie Show,' when 80,000 people stood on their feet and the lights came up. I was standing between that five foot space between the stage and the crowd and you feel that energy rush over you. It almost knocks you over. You know at that point, you're part of something massive. It was at that moment that I really felt that. I was part of creating that show. It was my work on the stage as well as hers. That was a really great moment and that is when I really got it," he said.

Unlike his sister, who preferred to hang out with her own tight-knit group of back-up dancers, who worshipped her, instead of other celebrities, Ciccone took it upon himself to party and do drugs, which he admits in the book.

As the brother of an A-lister like Madonna, Ciccone had a lot of the celebrity perks and hobnobbed (and snorted cocaine with some) with Donatella Versace, Naomi Campbell, Kate Moss, Johnny Depp, Jack Nicholson, Courtney Love, Demi Moore and Gwyneth Paltrow.

"The celebrity stuff was just icing on the cake," Ciccone said.

Later, Ciccone's occasional drug use would be ammunition for Madonna to send him to rehab, where he was told he didn't need it. Instead, he was battling inner demons far worse than any drug.

Like Madonna's success, her highly publicized relationships have also caused quite a stir throughout her career.

From Madonna losing her virginity in the back of a car (as did Ciccone) to her career-motivated conquests and her marriages, Ciccone was always somehow along for the romantic rollercoaster ride.

In his book, Ciccone reveals tidbits of Madonna's often tumultuous relationship with ex-husband Sean Penn, with whom he became "blood brothers." He insinuates that his sister will always love him regardless of their past.

Ciccone touches upon her relationship with the then-debonair philanderer Warren Beatty, who he caught rummaging through her trash looking for evidence that she was cheating. Later, we learn of her love for her personal trainer Carlos Leon with whom she had her daughter, Lourdes.

"I was fully involved in those relationships. I knew these guys very well and hung out with them separately. I got to known them each in their own way," he said. "When you're at home in high school or in math class, you don't think that in 10 years 'I will be having dinner with Warren Beatty.'"

The one relationship that Ciccone hasn't been as involved in is her marriage to Ritchie, with whom she has a son Rocco. Ciccone claims that Ritchie is homophobic and made gay jokes at their wedding in Scotland, which set the tone for their relationship.

"I don't think Guy was a stepping stone for her career," he said. "He was pretty cold from the beginning. I was kind of in the way. The best way to deal with me was to get me out and it worked, but I was ready to leave anyway."

Although Ciccone hasn't seen Madonna's Malawian documentary "I Am Because We Are," he doesn't think that her adoption of David Banda was self-serving.

"The staged things are all about publicity, but I don't think the adoption of David was. I believe she did that out of a truly deep concern and caring for the child," he said.

Part of what fueled the fire between Madonna and Ciccone were the messy transactions that went on between them when Ciccone decorated her homes. Their business dealings turned into dramatic and emotional exchanges via email or fax or through her personal assistant - many of which are written about in the book. Ciccone claims that he was never paid what he was worth, if he was even paid at all.

Besides money issues, Madonna's words - often ugly - had quite an effect on the Ciccone family.

"They (the family) have been through quite a bit where my sister is concerned. I think she doesn't quite understand that the words go out and actually have an affect on people. I think she thinks that they just vanish into the universe, but they hurt people," Ciccone said.

"She hasn't been kind to my parents, to my brothers and sisters on many occasions. I wanted to correct that and wanted to be the voice they never had. I am not speaking for them," he said. "It's just awareness that your actions and your words have consequences - like the book - I am fully aware of the consequences. And I wanted to remind her that in some way. Hopefully when she reads it; she will read it in the spirit of the way it was written. And that it's from a brother who loves her."

Ultimately, the question remains if blood will be stronger then pride. Although the two aren't on speaking terms today, they will always be brother and sister.

"It was very bumpy. The journey was frightening at times. I was discovering things about myself that I didn't know and probably sometimes didn't want to know. It was all a discovery," Ciccone said. "Looking back, I am glad it all happened. I don't regret any of it. Of course I wish that all of it was great all of the time. … She will always be my sister. That is never going to go away."