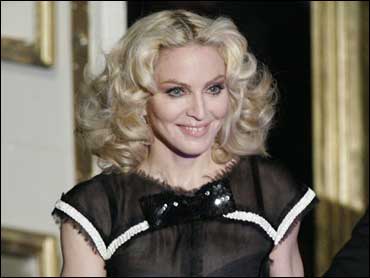 Madonna, pop music's quick-change artist, was inducted into the Rock and Roll Hall of Fame Monday and paid tribute to people who encouraged her and even critics who panned her for helping drive her career.

Madonna didn't perform, but asked fellow Michigan natives Iggy Pop and the Stooges to sing "Burning Up" and "Ray of Light."

Inductee John Mellencamp, with his son Speck playing guitar and his parents watching from a balcony above the Waldorf Astoria Hotel ballroom, joined the rock-kicking with a rumbling version of "Authority Song."

"I wrote this song, and I still feel the same way today as I did when I wrote it 25 years ago," Mellencamp said.

The show, which aired on VH1 Classic, was much freer than most other awards ceremonies, with inductees and presenters given plenty of time to make their speeches - some of which included expletives and racy references.

Madonna recalled her dance teacher, Christopher Flynn, who encouraged her to follow her dreams when she was only 14.

"Thirty-five years later, people are still encouraging me to believe in my dreams," she said. "What more could I ask for?"

Even the people who "said I was talentless, that I was chubby, that I couldn't sing, that I was a one-hit wonder, they helped me, too," she said. "They inspired me because they made me question myself repeatedly and pushed me to be better."

Timberlake, who helped produce Madonna's upcoming album, inducted her with an innuendo-ladened speech.

"The world is full of Madonna wanna-bes. I might have even dated a couple," said Britney Spears' ex. "But there is truly only one Madonna."

Timberlake told of how he felt ill one day while working on Madonna's new album and she asked whether he wanted a B-12 shot. He said sure, expecting a doctor to show up, but Madonna pulled out a syringe and said, "Drop 'em."

After he pulled his pants back up, "She looked at me and said, 'That's top shelf,' and that was one of the greatest days of my life," he said.

"Everything he said is basically true," Madonna confirmed, "but I didn't say 'Drop 'em.' I said, 'Pull your pants down.'"

Mellencamp talked of having surgery for spina bifida when he was 6 weeks old, saying doctors were worried he would be paralyzed below the neck. The 56-year-old rocker said he never knew of the surgery until his teen years, when a classmate asked him about the scar behind his neck.

His grandmother always whispered in his ear, "Buddy, you're the luckiest boy alive."

"I'm lucky to be standing here for any number of reasons," said Mellencamp, a heart patient who snuffed out a cigarette as he took the stage.

"They need to hear somebody out there feels like they do, in the small towns or the big cities," Joel said. "And it doesn't matter if they hear it on a jukebox in a gin mill or on a ... truck commercial."

Gamble, taking the stage with his longtime partner, invited the audience to answer back his wish for "peace."

"Thank you so much, because that's exactly what our music represented," Gamble said.

Patti LaBelle performed a chandelier-shaking rendition of Harold Melvin & The Blue Notes' "If You Don't Know Me By Now" to introduce Gamble and Huff. The songwriters and producers created a lush, melodic brand of soul known for their hometown and performed by a variety of artists.

Gamble cited one of their songs: Billy Paul's tale of the adulterous affair in "Me and Mrs. Jones."

"There's a little 'Me and Mrs. Jones' going on here in New York," he joked in reference to a sex scandal involving the state's governor, Eliot Spitzer.

He dispelled one rumor. The name of their record label's house band, MFSB, stood for mother, father, sister, brother, he insisted. For years, others let their imaginations run wild with the initials.

One odd sign of the times: among the favors distributed to guests at Monday's dinner was a box of 30 blank CDs, presumably so people wouldn't have to worry about buying CDs anymore.

The Ventures excelled at what is almost a forgotten art in rock music - the instrumental. Nokie Edwards' twangy guitar gave the band its distinctive sound. They performed their first hit, "Walk, Don't Run," and "Hawaii Five-O."

John Fogerty recalled how he and fellow members of Creedence Clearwater Revival used to hang out in a garage learning the Ventures' songs.

"When the Ventures first hit the radio, I would say I was gone," Fogerty said. "The Ventures went on to record 250 albums. Think about that. These days, some of us would be happy to sell 250 albums."

Cohen, a Canadian, is one of music's most highly regarded, if not best-known, songwriters, through pieces like "Suzanne" and the much-covered "Hallelujah." Damien Rice sang the latter song in tribute.

Lou Reed, who was inducting Cohen, carried a sheaf of papers to the stage and read several examples of Cohen's lyrics.

"We're so lucky to be alive at the same time Leonard Cohen is," Reed said.

Cohen, dressed in a black tux, recited the lyrics to his song "Tower of Song" in a hushed voice.

"This is a very unlikely occasion for me," he said. "It is not a distinction that I coveted or even dared dream about."

The Dave Clark Five followed the Beatles in the original British Invasion, with catchy hits like "Glad All Over." Led by drummer and songwriter Clark, the band enters the hall at a tragic time: singer Mike Smith died of pneumonia less than two weeks ago, at the age of 64.

Actor Tom Hanks paid tribute to the band in a rollicking speech, recalling times he watched it on "The Ed Sullivan Show" during the height of what was called the British Invasion of bands from across the pond.

"They forgave us our revolution by starting up another," Hanks said.

The band was overshadowed by more famous British bands like The Beatles, The Animals or The Rolling Stones. But Hanks pointed out a few things that made them unique.

"The Dave Clark Five were sensations in particular ways, not the least of which is their eschewing of animals or minerals in their choice of name," Hanks quipped. "The Dave Clark Five are one of the few British bands of the day that never replaced their drummer."

He also pointed out that unlike many artists of the day, Dave Clark "never, ever signed a piece of paper giving someone else his publishing. He never had to write a check to buy back his publishing. He has always owned his own publishing. Now is there a hall of fame for that?"

Joan Jett, Fogerty and Mellencamp played the band's "Bits and Pieces" and "Glad All Over."

"I firmly believe that without American music there would not have been a 1960s British invastion," said Clark after accepting the honor. "We were inspired and influenced by Elvis Presley, Little Richard, Jerry Lee Lewis, Sam Cooke, Ray Charles, to name but a few."

Little Walter, who died in 1968, joins the hall in its sidemen category. He recorded frequently with Muddy Waters in the 1950s.