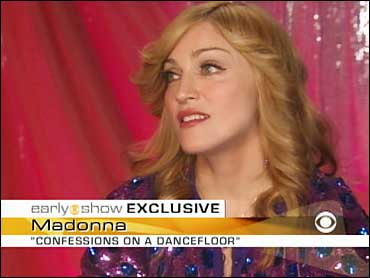 Madonna is considered one of the hottest performers around for many reasons.

Physically, she's in great shape and, professionally, her latest album, "Confessions on a Dancefloor" is No. 1 in 29 countries, including Japan, where co-anchor Harry Smith recently had an exclusive interview with her.

In Part One of the interview, seen on The Early Show Monday, Madonna and Smith chatted about how driven she still is to be the best she can possibly be and give her fans all she has to offer.

In the portion of their talk shown Tuesday, Madonna

explained to Smith
how she stays so physically fit.

"It's hard work, bro," she chuckled. "I exercise. I take good care of myself. I get facials. I get massages. I eat very healthy. I stay out of the sun. I don't drink very much, except when I come to Japan. And, I don't know. It's — it takes a lot of work."

Told by Smith her new album is perceived to be "frothy," meant to be danced to, and fun, Madonna came up with some descriptions of her own: a celebration, and ebullient.

Smith read the lyrics of one of the new songs: "It's funny. I spent my whole life wanting to be talked about. I did it; just about everything to see my name in lights. Was it all worth it?"

"And how did I earn it?" Smith continued. "Nobody's perfect. I guess I deserve it."

"Of course," Madonna said. "But that's why it's called 'Confessions on a Dance Floor.' Because, somewhere in the, what you call froth, is truth. … And they're rhetorical questions. … I mean, hopefully, what I like to do is make everybody ask those questions. … But, at the end of the day, you know, I have to be grateful for all the choices I made, because they landed me where I am."

She added that she can't name them all.

When asked which are her favorites, Madonna cited "Holiday," but Smith noted that it only got to No. 16 on the charts.

Madonna said she also particularly likes, "Like a Virgin," which went to No. 1.

She pointed to "Material Girl" as another favorite of hers. It hit No. 2.

Another fave? "Like a prayer," which also became a chart-topper.

Smith told Madonna two of his favorites from Elvis are "Heartbreak Hotel," which Madonna called "a good one," and "Kentucky Rain," which Madonna agreed "is a beautiful one."

When Smith referred to Madonna's daughter as a "budding ballerina," Madonna said: "She wants to do her own thing, and she doesn't want me coming to her rehearsals either. … She's in 'The Nutcracker' in a couple of weeks, actually, in a week. And her whole thing has been, 'Please don't come to the rehearsals. I wanna surprise you. I wanna surprise you.' And she's very dedicated to what she does. She has a very clear idea of what she wants to do. She doesn't wanna be a singer."

"If they don't watch television, they use their imagination," she said. "They read. They interact. They play interactive games. They get outside of the house. They have hobbies. … And we have discussions. … It's not like, oh, you know, 'TV's terrible. It's a drug. Turn it off.' It's just not something anyone does in our house."

Smith held up Madonna's first two albums, which were on vinyl.

He asked Madonna if, at the time, she saw herself where she is now and she shot back, "Absolutely not. No way. I never imagined what my life, how it would unfold, and how my career would take shape and the journeys I would go on and, you know, the fact that I would be living in Europe. … I couldn't even have fathomed it in a million years. I was just so grateful to make one record."

She says she'd like to make another movie, or step behind the camera and direct.