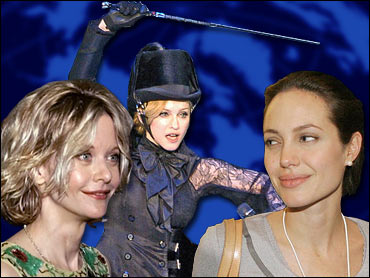 In 2002, the world smiled with approval when Angelina Jolie brought back an orphan boy from Cambodia. No one mentioned the fact that in 2001, the United States government suspended adoptions from the country due to concerns about child trafficking.

Now Madonna is the poster girl for what critics say is an unfair advantage enjoyed by celebrities who want to adopt children from foreign countries. Some experts say that in taking custody of 1-year-old David Banda from Malawi, Madonna circumvented the African nation's strict adoption laws, which require the prospective parents to live in the country for 18 months.

"The part that is good is bringing attention to orphans of Africa, the fact that they need help," said Cheryl Carter-Shotts, founder and managing director of Americans for African Adoptions. "The fact that's not good is that rules and regulation that the average person has to comply with are dropped."

According to reports, Madonna also donated $3 million for the country to build an orphanage to care for up to 4,000 AIDS orphans — another sticking point for Carter-Shotts.

"You just can't walk into a country and disregard the laws and disregard their country Along with offering $3 million, she was going to build orphanages and teach her religion," she said. "$3 million is a huge sum of money for [Malawi]. Of course they would comply."

The New York Post reported that Madonna wants to spend some of the $3 million to drill wells to provide clean water, but that the water "will be Kaballah water." Madonna is a practitioner of the mystical Jewish sect; Malawi is a predominantly Roman Catholic country.

Madonna's spokesperson did not return The ShowBuzz request for a comment.

On Wednesday, the singer issued a statement that said she and her husband, Guy Ritchie, had been planning the adoption for many months prior to their trip to Malawi.

"Nevertheless, we have gone about the adoption procedure according to the law like anyone else who adopts a child," she said. "Reports to the contrary are totally inaccurate. The procedure includes an 18-month evaluation period after which time we hope to make this adoption permanent."

Other celebrities have adopted children from poorer countries. Jolie adopted her son Maddox and Ethiopian daughter Zahara. Meg Ryan has a Chinese daughter, and Ewan McGregor's daughter was born in Mongolia. Screen legend Mia Farrow pioneered celebrity international adoption. She has 10 adopted children, two of which are from Vietnam. The most famous is Soon-Yi Previn, who was born in South Korea and later married Farrow's longtime boyfriend, Woody Allen.

African adoptions are incredibly expensive. Carter-Shotts said some agencies charge as much as $30,000. She said Americans for African Adoptions charges up to $9,000 — $7,500 for Ethiopia and $4,500 for Liberia. In addition, "regular" people have to battle red tape and strict laws.

Cory Barron, a spokesman for the Children's Hope International, which places children from countries like China, Russia and Vietnam in American homes, said he does not know the particulars of Madonna's adoption — but thinks that it has the potential to bring attention to the plight of the world's 140 million orphans. He said his organization deals with countries that see adoption as a good option for their children. But many nations, especially in Africa, are not adoption-friendly, even though UNICEF estimates that more than 12 percent of the population in Sub-Saharan Africans are orphans.

For example, Barron said that Children's Hope International placed 8,000 Chinese children and 4,600 Russian children in American homes, compared with 441 Ethiopian children. Ethiopia, he said, is one of the African countries with more lenient laws.

"The good thing about Madonna is that she may make the [Malawian] government realize that adoption is a good option," he said. "The reality is there are millions of orphans that need homes and there are very few African countries that are adoption-friendly."

Carter-Shotts would have preferred to see Madonna adopt an older child. She said most African orphans are over 5 years old. She adopted her two African children when one was 13 and the other was 5.

Barron and Carter-Shotts both said adoption should be the last option, and that it's always better to have the child stay in his or her birth country. Banda's mother died shortly after his birth. His father put him in an orphanage because he feared he could not take care of his son.

"She could sponsor the father, she could pay for education, she could financially assist this child," Carter-Shotts said. "There's nothing wrong with staying with Africa. The problem is the disease and the lack of money. There's more than needed on the continent. Adoption is one small portion; sponsorship, schools… all of that is critical."

Carter-Shotts said her organization is currently raising money for AIDS education in Africa. To find out what you can do click here.
By Caitlin Johnson