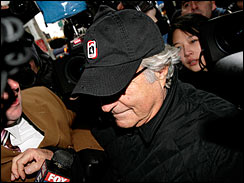 (AP Photo/Seth Wenig)
While Bernard Madoff, the financier accused of running a $50 billion Ponzi scheme, was in a New York courtroom Monday answering to prosecutors, lawmakers in Washington held their first hearing on Madoff's investment scandal.

Democratic lawmakers charged that the Securities and Exchange Commission had "failed miserably" in ignoring warnings that could have uncovered wrongdoing years ago.

He agreed to testify at first, but ended up telling Congress he was too physically worn down and needs more time.

Markopolos, A derivatives expert, first alerted officials nearly 10 years ago about what he saw as Madoff's scam. In 2005 he sent this 19-page report to the SEC titled "the World's Largest Hedge Fund is a Fraud..." concluding it was "highly likely" that "Madoff Securities is the world's largest Ponzi scheme." Using mathematical models and charts, Markopolos outlined 29 "Red Flags" in a virtual blueprint of how to investigate Madoff, calling his returns "too good to be true" and saying he worried about his "personal safety."

"There were plenty of indications of problems going on, but somebody just didn't do their job," said Rep. Donald Manzullo, R-Ill.