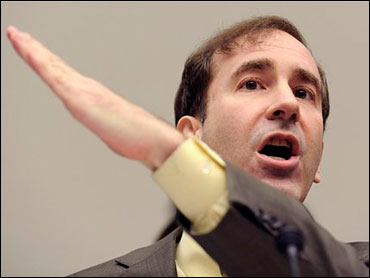 
On Capitol Hill Wednesday, the financial analyst who first blew the whistle on Bernie Madoff back in 2000 went public for the first time, stunning lawmakers with the full scope of the $50 billion fraud. CBS News correspondent Armen Keteyian reports.

In two hours of riveting, no-holds barred testimony, Harry Markopolos revealed the depth - and danger - of his nine-year fight to expose the Madoff scandal.

Markopolos said at one point he feared for his life.

"He would have known my name and, he knew he had a team tracking him. I didn't think I was long for this world," he said.

One reason: Bernie Madoff was among the "most powerful men" on Wall Street.

Another: In 2002 Markopolos said he discovered billions of dollars in "dirty money" was being funneled into Madoff Securities through a series of off-shore accounts.

"When you're that big and that secretive, you're going to attract a lot of organized crime money, and which we ... now know came from the Russian mob and the Latin-American drug cartel," Markopolos said.

A 162-page document filed with the U.S. Bankruptcy Court in Manhattan late Wednesday lists several thousand of the people and entities that handed money over to Madoff to "invest". Among the victims are some very well-known personalities - and Madoff's own defense lawyer. Click here to read more.

Markopolos said he began his crusade back in late 1999, when he was asked by his employer to see if he could match an investment strategy that produced unusually steady returns - like Madoff's.

"It took me about five minutes to figure out that he was a fraud," Markopolos said.

Despite "gift wrapping" evidence of the largest Ponzi scheme in history, Markopolos ran into a stone wall at the SEC. It was an agency, he charged, was unwilling and incapable of following his leads.

"I gave them a road map and a flashlight to find the fraud, and they didn't go where I told them to go," Markopolos said.

And he wasn't the only one warning the feds.

This anonymous letter sent in April 2006 to the head of the SEC was obtained exclusively by CBS News.

In it, SEC Chairman Christopher Cox is told that Madoff keeps two "sets of records. The most interesting of which is on his computer which is always on his person."

But again, nothing happened.

As to the question of whether Bernie Madoff pulled off $50 billion worth of fraud all by himself?

Markopolos had a very simple answer: "No."