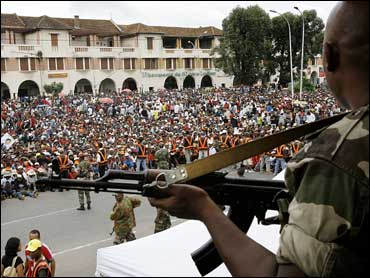 Madagascar's president announced Tuesday that he was dissolving the government and handing power to the military after weeks of struggle with the leader of the opposition on the impoverished Indian Ocean island.

The opposition head, Andry Rajoelina, paraded through the streets of the capital surrounded by soldiers before entering a presidential palace seized by the troops on Monday night.

A breakaway army faction previously claimed it was neutral in Rajoelina's power-struggle with the president and interested only in restoring order. It was not immediately clear how much of the army has gone over to the opposition leader.

An aide announced after President Marc Ravalomanana's radio address to the nation that a council of high-ranking, veteran military officers would hold elections within two years. Ravalomanana's term would have ended in 2011. The aide was not identified.

Despite some media reports to the contrary, a State Department spokesperson told CBS News that President Ravalomanana has made no request to the United States for sanctuary, nor is he at the U.S. Embassy in Antananarivo.

Rajoelina issued no immediate public reaction to Ravalomanana's resignation. He has accused Ravalomanana of misspending public funds and undermining democracy in Madagascar - an island off the coast of Africa known both for its natural beauty and its history of political infighting and instability.

Over the weekend, Rajoelina declared himself president of a transitional government and promised new presidential elections within two years. On Monday, he called on the army to arrest the president, but soldiers refused.

Troops then seized the unoccupied presidential palace while the president was in his official residence, surrounded by supporters and army guards.

The palace was the site of a deadly clash between anti-government supporters and troops last month that prompted some soldiers to stop obeying the president.

Tensions have been rising since late January, when the government blocked an opposition radio station's signal. Rajoelina supporters set fire to a building in the government broadcasting complex as well as an oil depot, a shopping mall and a private TV station linked to Ravalomanana. Scores of people were killed.

Days later, soldiers opened fire on anti-government protesters, killing at least 25. The incident - at the same palace seized Monday - cost Ravalomanana much of the support of the military, which blamed him for the order to fire at demonstrators.

The African Union, which held a meeting about Madagascar at its Ethiopian headquarters Tuesday, wavered on whether Ravalomanana's resignation would lead to the Indian Ocean island's suspension from the continental body.

According to the AU's charter, coups or unconstitutional changes of government are cause for automatic suspension. The country is only readmitted when constitutional order is restored, usually by elections.

(AP Photo )
Under the cover of darkness, rebel soldiers loyal to opposition leader Andry Rajoelina approach the downtown presidential office in Antananarivo, Madagascar, March 16, 2009. A colonel leading the 90 soldiers involved told The Associated Press the operation was not an attack.

AU Commission Chairman Jean Ping told journalists that if the military leadership handed power to Rajoelina, the capital's former mayor, that would violate the constitution.

But, he said, if the military were to allow the prime minister to take charge and arrange elections, the move could be considered constitutional.

"If they don't follow this, this is a coup, or an attempt to seize the power by force," Ping told journalists. "If they give the mayor access to the power, it's not constitutional. We don't know yet what is going to happen, exactly."