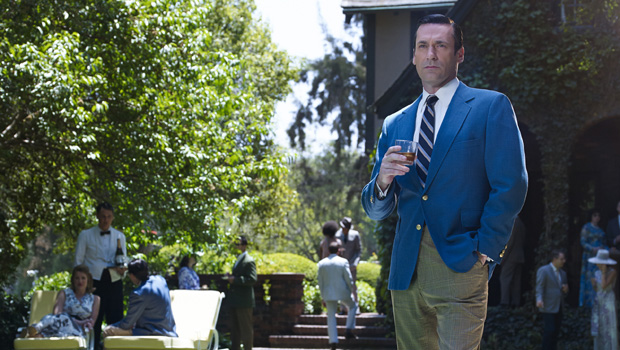 "Mad Men" is nearing its end with grace and assurance as its characters already are scattering from view. After seven seasons barnstorming a long-ago decade, the series feels like it's coming in for a landing, though just how smooth or rocky won't be known for sure until touchdown (Sunday at 10 p.m. ET on AMC).

Even so, already there's plenty to say in eulogizing this glorious drama, which monitored a swath of modern American life through the prism of the 1960s New York advertising business, led by the prismatic, enigmatic ad man Don Draper, played, of course, by series star Jon Hamm.

Except what hasn't already been said (and re-said) about "Mad Men," which, in the hands of series creator Matthew Weiner, charted its own path, defying expectations while propelled by a peerless company of actors?

-- Well, for starters, there's that clarinet.

Pinpoint the most affecting moments in "Mad Men," and you're likely to find a plaintive clarinet (or fellow woodwind) reinforcing the scene's poignancy.

"A mournful, lonely boy sound," says series composer David Carbonara, whose contributions have reliably underscored, so to speak, what was taking place onscreen without drawing attention to themselves or telegraphing an intended response. "I'm that kind of composer. I don't showboat."

And unlike so much of TV, where so-called "background" music blankets the action, Carbonara was sparing with his music cues, whether a clarinet or more full-bodied interludes: "On 'Mad Men,' I tend to come in late and leave early," he says with a laugh.

"When I worked with Robert Morse on that," Carbonara recalls, "he was like, 'What do you do on the show?' He knew me from producing songs, not writing the score. 'I compose the music on "Mad Men,' I told him. And he says, 'There's music on 'Mad Men'?!'"

Such are the subtleties of Carbonara's work.

-- A not-so-subtle component that nonetheless is often overlooked: How funny "Mad Men" was.

The reigning mood of the series was somber. Meditative. Storytelling often with a lump in its throat.

But leavening the heaviness was a generous helping of sight gags, droll exchanges and tragicomic story twists (two words: lawnmower amputation). All by itself, the gin-soaked silver tongue of Roger Sterling (as played by John Slattery) was always good for a laugh.

Weiner says he and his fellow writers were committed to infusing their scripts with things "that would make US laugh, and that would not make that world too solemn."

Humor can be mined from nothing more than a surprise, "making people laugh at a moment of tension," he notes. "The audience deserves that. That should be a part of the story we share with them. And it makes the drama more dramatic."

Weiner can reel off one funny example after another, but there's none more virtuosic than, in season five, Lane Pryce's thwarted suicide.

As the agency's disgraced financial officer, Lane (Jared Harris) made a desperate effort to asphyxiate himself inside his brand-new Jaguar. After tricking out a rubber hose from the car's exhaust pipe, he planted himself in the driver's seat and turned the key. But at the moment of truth, this luxury machine (already characterized in prior scenes as finicky and even "a lemon") made good on its image. It refused to start.

"It's black humor," says Weiner, "but it also helps the story so much, because that failure gives Lane's suicide attempt comic release. And when he actually did pass away (by hanging himself in his office) you felt it, so much more painfully."

-- Beyond the action, music and words, "Mad Men" could trigger a reaction in static ways -- even from a glimpse of a long-forgotten object with which the viewer may have once been connected in real life. With its period look evolving through the '60s, the series offered viewers an almost tactile experience thanks to its props and art direction. "Mad Men" didn't draw on the past as much as reclaim it. Products and brands (the stuff of advertising, after all) was its onscreen currency.

"It was a story about objects being a part of our lives," says Weiner, "and about memory and the feeling you get from recognizing them."

And, while the show maintained a lovely period sheen, what was on display was rarely fetishized or top-of-the-line, Weiner says. It was the routine stuff.

"The philosophy of the show was to reflect everyday life from another time -- a slice of bourgeois, mostly white America," he says. What were curated as props (whether bought, rented or borrowed) were the mass-produced consumables that people commonly owned: "Not the zebra, just the horse."

This could pay off powerfully for the audience. Consider an office scene in Season Four, Episode 5: Don pours sake for himself and his potential new conquest into a certain pair of tumblers with gold rims and aqua stripes -- identical glassware from 50 years ago that at least one viewer instantly recalled drinking milk from in his family's kitchen as a child.

That depth of connection lives on thanks to so many moments "Mad Men" viewers will be left with after Sunday, when it leaves its audience behind.

But how will it end? Several theories are floating around -- from the D.B. Cooper theory to the Wichita theory. Will Don Draper live?

By Sunday night, we will have the answer.

Tell us: How do you think "Mad Men" will end?