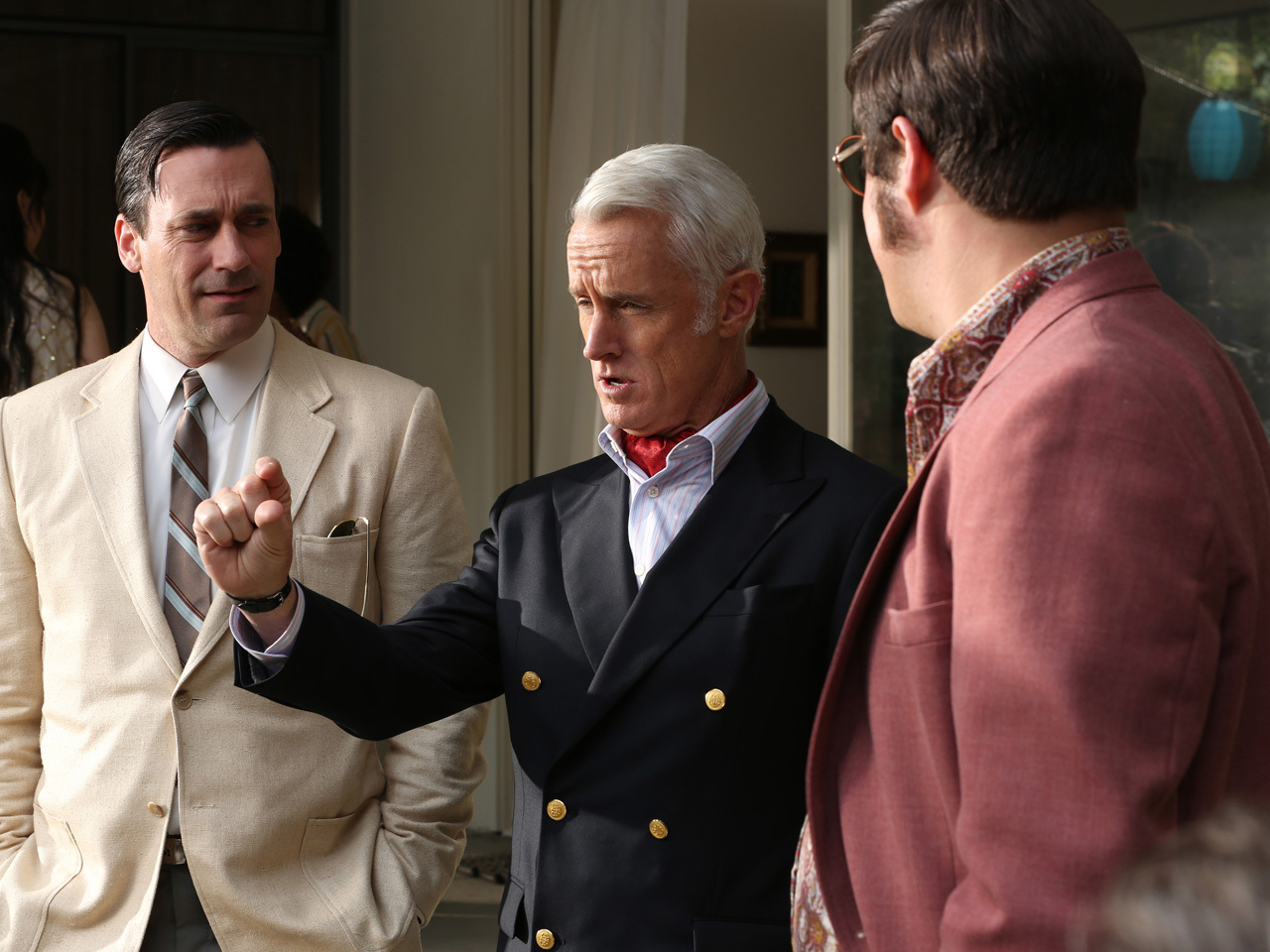 People's true colors came to light on Sunday's second to last episode before the season finale. Sally grows up seemingly overnight after losing all respect for her father last week, Peggy and Ted flaunt their feelings for each another, angering many in the office, and Pete decides to go to war with Bob, but puts down his rifle, so to speak, once he discovers who -- and what -- Bob really is. And now onto the best moments...

1) Don wakes up in Sally's bed with a crippling hangover. Still reeling from Sally's loss of innocence, after she caught him sleeping with Sylvia, he has decided to drown his sorrows even further in the bottle -- and the reason is certainly Sally given that he chose to sleep in his daughter's bed. Megan still doesn't know why Don is so upset and curled up in the fetal position; she just thinks he's drinking too much (so, what else is new?): "I don't know what's going on, but you've gotta pull back on the throttle a little bit, honey," she says, and later encouraged him to stay home from work and "try and sleep it off."

2) But "sleep it off" is not what Don has in mind. Instead he chooses to gulp down vodka and orange juices like his life depends on it. Though while he's sucking down his vodka, he gets an even more upsetting call from Betty, who says Sally does not want to come to Don's this weekend, or ever again, actually. Sally has decided she wants to go away to boarding school. To which Don replies, a little too quickly and guiltily, that he'll "pay for all of it." Betty is giddy over Sally's choice of school, Miss Porter's, the same one Jackie Onassis attended. "Jackie did well twice," Betty says, referencing her two lucrative marriages. "As did you," Don says. (I am beginning to enjoy their newfound friendship -- dare we call it that? -- and easy rapport). Don ends the conversation by asking Betty, "Will you tell her that, Megan -- we both -- miss her?" It's actually quite heartbreaking.

3) Meanwhile, once at Miss Porters for a visit. Sally and Betty put on a good show of being a lovely, well-mannered mother and daughter team. Sally displays her best manners, and dare I say that Betty is almost likable? (I almost found myself warming up to her this entire episode actually...) As part of her admissions process, Sally must stay the night at the dorm with two students -- two mean girls if I've ever seen them. They immediately berate Sally for not showing up with a bottle of booze and a pack of smokes in her hand. She awkwardly offers them money, to which they scoff that that's the last thing they need. However, Sally has a solution. And the answer to all of her problems is Glen (Matthew Weiner's real-life son), who we have not seen all season. Glen immediately shows up when he is called, and arrives through the window with everything three teenage girls could want: a bottle, some weed and a buddy named Rolo.

4) One of the mean girls leads Glen away, leaving Sally with Rolo. However, all he wants is to get in her pants, but good girl Sally is not game. Rolo calls her "frigid," and Sally impressively does not succumb to his peer pressure, instead she calls for Glen and says, "He tried to force me." Rolo counters, "She's a lying little tease." Glen then proceeds to (awkwardly) beat up Rolo as Sally looks on, smiling at her knight in shining armor defending her honor.

5) Sally seems to have grown up overnight in this episode, maybe it's the realization that her father is far from her hero, but even Betty sees her as a peer suddenly. On the way back from Miss Porters, Betty gives Sally a cigarette, saying, "I'd rather you do it in front of me than behind my back." Adding that Don must have given her a smoke before, to which Sally coldly replies, "My father has never given me anything." Ouch.

6) Meanwhile, back at the Sterling Cooper Draper Pryce offices, it's all fun and games and flirtations. Ted and Peggy are now openly flirting with each other, and Ted's obvious favoritism towards her is not amusing anyone -- not Ginsberg, not Joan, and certainly not Don. Every idea Peggy has, Ted eats up with the enthusiasm I'm sure he wishes he could express elsewhere...

7) Peggy and Ted even dare to go out on a pseudo day-date under the guise of seeing "Rosemary's Baby" as research for St. Joseph's children's aspirin. But they are caught red-handed by Don and Megan (Don who was supposed to be home "sick," speaking of getting caught). Though the pair hardly seem ashamed of their actions -- it's as if they believe their motives and feelings are so pure, that they don't think they are doing anything wrong. Though Don does not agree. He can see through their actions, and is quite aware that Ted has feelings for his old protege.

8) Don's anger at Ted causes him to take back his word that he would not take on Sunkist as a client because of Ocean Spray, and makes a call to California that very night telling Harry that they will accept Sunkist, and their very large budget. The next day, in a meeting, Roger Sterling tells Ted and Jim that they'll have to resign Ocean Spray, as Sunkist now has $8 million to spend, which caused Jim to exclaim, "Great Caesar's ghost." Though Ted is not pleased, not one single orange drop, saying the move will sacrifice the agency's reputation, "Someone has to let them know to look out for a knife in their back." But once Ted accepts that he's lost the war of the juices, his mind goes quickly back to Peggy, and he tells Don that Peggy should be on the account, given her "juice experience." OK, Ted, whatever you say.

9) In more manly non-juice related dealings of the agency, Ken Cosgrove is almost killed -- yet again -- by his Detroit Chevy clients. While on a hunting trip with them, they nearly shoot his eye out (I actually thought they may have killed off Ken right then and there). And that was the last straw for Ken, who is about to become a father. "Chevy is killing me. I hate Detroit," he tells Pete. To which Pete says that anyone there would gladly trade places with him in a second -- in fact Pete would gladly take his place, so he does. But that means he must work with Bob....

10) And who the heck is Bob? Well, we now kind of know, and the answer is shocking, but definitely not unbelievable. While Pete is on a mission to get him out of his way -- and has Duck do some digging to find him a new place of employment, he ends up unearthing a whole other identity (that would rival Don's secret identity -- well, almost). Duck discovers that Bob's personnel record "might as well be written in steam." Turns out he was West Virginia country boy turned "manservant" for the senior vice president of Brown Brothers Harriman & Co. Whatever that entails! Though Pete decides not to go to war, saying, "I don't know how people like you do it. Where you are and who you are is not my concern. I surrender." Adding: "I want you to graciously accept my apologies, work alongside me but not too closely. I'm off-limits." And with that, I guess they have an understanding -- as long as Manolo stays away from Pete's mother. To which Bob replies yet again that Manolo does not like women for Pete's sake!

Tell us: What were your favorite moments from last night's episode?