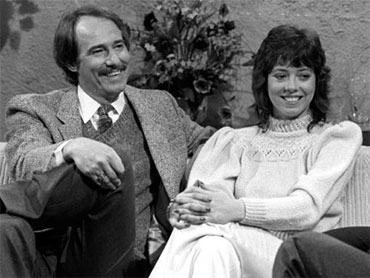 Former child star Mackenzie Phillips alleges in a new book that she and her famous father, John Phillips of the 1960s super-group The Mamas and the Papas, had a sexual relationship, and that he introduced her to cocaine.

Mackenzie, 49, spoke about her tell-all memoir, "High on Arrival," in an episode of "The Oprah Winfrey Show" airing Wednesday, as the book hits store shelves.

Mackenzie has a long history of drug abuse, and pleaded guilty in 2008 to one count of felony cocaine possession and entered rehab. Her drug use led to her being dumped in 1982 by the hit sitcom "One Day at a Time," which aired from 1975-1983.

On "Oprah," Phillips spoke openly about the secret she'd been keeping for more than 31 years about the sexual relationship she claims she had with her father, beginning when she was in her late teens.

At one point, Phillips writes in "High on Arrival," "My father was not a man with boundaries. He was full of love, and he was sick with drugs. I woke up that night from a blackout to find myself having sex with my own father."

John died in 2001 after a lifelong battle with drugs and alcohol.

Of cocaine, Mackenzie told Winfrey, "He put the needle in my arm and pushed the plunger in and he missed."

"Missed the vein," Mackenzie replied, "and my whole arm went numb, because it was cocaine."

But Mackenzie writes that she forgave her father when he was on his deathbed. "I would not be the woman I am, had I not been your daughter," she says she told him. "So, I want you to know that I forgive you, and I love you very, very much."

Some Phillips family members doubt that everything Mackenzie's saying about her late father is true, according to US Weekly Senior Editor Bradley Jacobs, who recounted for "Early Show" co-anchor Maggie Rodriguez an interview appearing in the magazine with Mackenzie's half-sister, sister Chynna Philips: