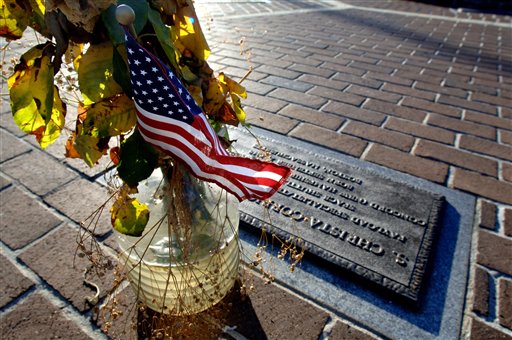 Mark McGwire sent Cardinals fans home happy, even if home run No. 54 did little for his disposition.

McGwire had a 509-foot answer for Sammy Sosa, who hit his 52nd home run earlier Wednesday. His two-run shot moved him closer to Roger Maris' hallowed record in the St. Louis Cardinals' 7-6, 10-inning loss to the Florida Marlins.

He wasn't in a celebrating mood after the Cardinals' bullpen blew a six-run ninth-inning lead. But he also understood that he is now the only storyline that counts on a 62-70 team.

"I know what America is watching," McGwire said. "They're not watching the Cardinals, they're watching me."

McGwire knew of Sosa's home run before the game -- "The TV's on in the clubhouse. How can you not?" -- but said it didn't give him extra incentive.

"I can only take care of myself," McGwire said. "Let's just have fun watching till the end of the season."

At least one Marlin wasn't envious.

"I wouldn't want to be in his shoes day in and day out," Kevin Orie said. "Personally, I wouldn't like all that attention. It takes a special person to handle it."

McGwire, now within eight homers of breaking Maris' record of 61 homers in a season, is only the third player in NL history to hit 54 homers and the first in 49 years. Ralph Kiner hit 54 homers in 1949 and Hack Wilson hit a league-record 56 in 1930.

McGwire's homer was one of six in a two-inning burst after the game had been scoreless through six.

"All of a sudden, runs galore," McGwire said.

John Mabry also had a two-run homer in the Cardinals' five-run eighth before the Marlins hit four home runs in the ninth, including three on consecutive at-bats by Derrek Lee, Cliff Floyd and Orie, in an eight-pitch sequence off reliever John Frascatore.

Mark Kotsay's three-run pinch-hit homer off Jeff Brantley tied it 6-6. Florida's home-run barrage was only witnessed by about half of the crowd of 30,004, having been satisfied by McGwire's latest shot that helped the Cardinals take a 6-0 lead.

After the St. Louis bullpen blew its 29th save, Randy Knorr's RBI double in the 10th off Juan Acevedo (6-3) sent the Cardinals to their fifth straight loss. The Cardinals have lost eight games when leading after eight innings.

"I'd have bet anything except my children that we'd have walked away a winner," manager Tony La Russa said.

Fernando Tatis tripled to lead off the eighth and McGwire drove an 0-1 high fastball from rookie Justin Speier for the shortest of his four 500-foot-plus homers this year at Busch Stadium. Center fielder TodDunwoody never moved as the ball soared over his head and landed just above the wall used for background beyond center field.

"I knew it was gone," Speier said. "You want to challenge a hitter like him and go right after him, and if he hits one off you, oh well."

McGwire hit 58 homers last year, 34 with Oakland and 24 with the Cardinals after joining St. Louis on July 31.

He warmed up for the effort with eight homers in 15 batting-practice swings, including one that banged off the scoreboard beyond the left-field wall. But before ending a seven at-bat homer drought -- roughly his season ratio -- his power had been straight up.

McGwire hit towering popups in the first and sixth off Marlins starter Kirt Ojala and took a called strike in the fourth, never taking the bat off his shoulder.

He has 30 games to reach Maris' mark with 19 of those at home, where McGwire has obliterated the stadium record with 28 this season. The previous mark was 18.

Mabry's homer also was off Speier, who has allowed four homers in 11 2/3 innings, in the five-run eighth. Ron Gant added a run-scoring double.

Cardinals starter Darren Oliver allowed three hits in seven scoreless innings. He struck out six and walked three in his most impressive outing since joining the Cardinals July 31 in a trade deadline deal with Texas.

The Cardinals lost second baseman Delino DeShields on the game's first out. DeShields strained his left shoulder making a diving stop on a grounder by John Cangelosi, but made the play before leaving.