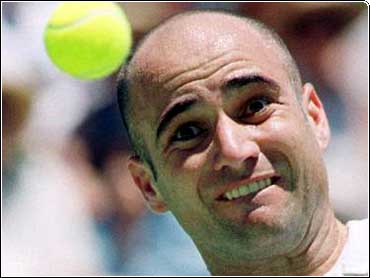 With John McEnroe making his debut as U.S. captain, Andre Agassi leads an injury-depleted American team against Zimbabwe in the first round of the Davis Cup this weekend, while Australia opens defense of its title against Switzerland.

In other World Group ties, the Czech Republic hosts Britain, Italy travels to Spain, Russia is at home against Belgium, Slovakia plays host to Austria, France plays at Brazil, and Germany is home vs. the Netherlands.

Fresh off his victory at the Australian Open, his third Grand Slam title in eight months, Agassi spearheads a makeshift U.S. side against Zimbabwe.

With Pete Sampras and Todd Martin forced out with injuries, McEnroe called on Chris Woodruff and Rick Leach to step in at the last minute. Zimbabwe, meanwhile, is led by the veteran Davis Cup combination of brothers Byron and Wayne Black.

Agassi opens play Friday against Wayne Black, while Woodruff faces Byron Black in the second singles. In Saturday's doubles, Leach and Alex O'Brien who have never played doubles together before will team up against Wayne Black and Kevin Ullyett. In Sunday's reverse singles, it will be Agassi vs. Byron Black, and Woodruff vs. Wayne Black.

The matches will be played on a hard court surface in front of a sellout crowd at the 4,000-seat indoor National Sports Center.

It's the first time a U.S. Davis Cup team has played in Africa. The players have complained about the jet lag (Agassi flew to Zimbabwe directly from Melbourne) and the altitude (5,000 feet above sea level).

"I consider us a slight favorite," McEnroe said. "But we know it's going to be very difficult. These are not conditions that a lot of tennis matches are played under, this type of altitude. They (Zimbabwean players) have obviously spent a lot more time here than us. So it's not going to be easy for us. But none of us came out here to lose this."

Said Agassi: "It's going to be quite an experience. It's never easy playing away. I think it's going to be incredibly difficult. I think we'll be fortunate to get through this weekend."

But Byron Black said Agassi gives the Americans the edge, at least on paper.

"I still think we'robviously the underdogs," he said. "Andre is playing the best tennis of anyone on the planet right now. He's won three of the last four Grand Slams. We're going to give it a shot against Andre. We're not counting anything out. But obviously the guy we're aiming to beat is the No. 2 player, Chris Woodruff. Hopefully, the doubles could be the crucial decider."

The match has taken on added significance with the appearance of McEnroe, who after years of lobbying, was finally appointed captain of the U.S. team.

McEnroe worked hard to convince both Agassi and Sampras to play. But then Sampras withdrew after suffering a hip flexor injury in his five-set loss to Agassi in the Australian Open semifinals.

"I guess I was living in a dream world thinking Pete was going to play," McEnroe said.